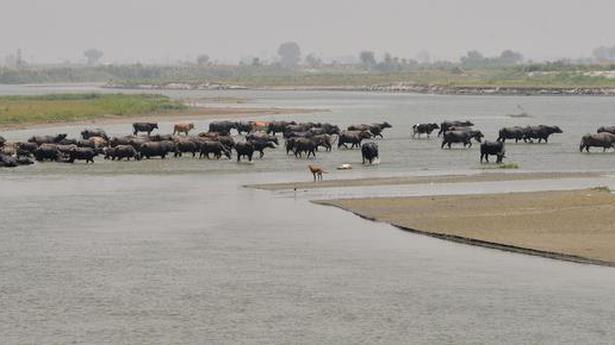 Though only around 22 km of the 1,400-km river flows between Wazirabad and Okhla in Delhi, the national capital accounts for 76% of the pollution load on the river. Numerous projects have been launched to clean the river but they have so far yielded little to no results

The draft NCR Regional Plan-2041 prepared by the National Capital Region Planning Board (NCRPB) has fixed 2026 as the new deadline to ensure ‘zero discharge of untreated sewage and industrial discharge into the Yamuna’.

The story of cleaning up the Yamuna has so far been that of missed deadlines. The first Yamuna Action Plan (YAP), for which a loan agreement was signed in 1992, was for “improvement of water quality conservation in the river, and hygiene environment in the cities in the river basin”.

After the first and second plans, YAP-III is presently under way, but the Yamuna is not even fit for bathing in the Delhi stretch, except for Palla — the point where the river enters Delhi — according to city government data.

On January 19, 2020, in the run up to the Assembly election, Chief Minister Arvind Kejriwal announced a 10-point guarantee card and said: “The Yamuna will be cleaned and made pollution-free. We promise that after five years, anyone will be able to take a dip in the Yamuna without fear of diseases due to dirty water.”

On March 9, during his budget speech, Deputy Chief Minister Manish Sisodia said: “The Yamuna can now be cleaned completely within the next three years.”

Officials say the Yamuna can be cleaned, but experts say it cannot be done with “business as usual” attitude. “We can clean the Yamuna and I will say that with a very big ‘but’. The way things are right now, it is not going to happen, but it can be done if the government really wants to do it,” said Manoj Misra, convener of the Yamuna Jiye Abhiyaan, a civil society initiative for the river’s rejuvenation.

The Yamuna originates in the Yamunotri glacier in the Himalayas and travels through Himachal Pradesh, Uttar Pradesh, Uttarakhand, Haryana, Rajasthan and Delhi before its confluence with the Ganga.

Though only 2% of the 1,400-km river flows between Wazirabad and Okhla in Delhi, the city accounts for 76% of the pollution load on the river, as per one of the reports of a monitoring committee formed by the National Green Tribunal (NGT).

The Supreme Court and the NGT have also pulled up various authorities responsible for cleaning the river for their laxity.

According to the experts and the committee, two of the major causes of pollution are less water in the river in Delhi and 22 drains dumping sewage and industrial effluents into it.

To solve the first issue, the water flow has to be increased. The second one can be addressed by treating the sewage and effluents generated in the city.

In 1994, the Supreme Court took cognisance of a newspaper article “Quiet Flows Maily (dirty) Yamuna” and summoned the Central Pollution Control Board (CPCB) to explain the issue.

The Yamuna at Kalindi Kunj, the white froth is caused due to industrial effluents discharged through drains in Delhi.

Later, various stakeholders, including the Delhi government, the Delhi Jal Board (DJB), the Delhi municipal corporations, and the Uttar Pradesh and Haryana governments became part of the case.

In a judgment on January 13, 2015, on a case filed by Mr. Misra, the NGT formed the ‘Maily se nirmal (from dirty to clean) Yamuna Revitalisation Plan, 2017’, which was set to be completed by March 31, 2017. But that did not happen and the NGT, in July 2018, formed a monitoring panel headed by two retired bureaucrats to primarily implement the 2015 judgment. The NGT dissolved the committee in January 2021 and directed Chief Secretaries of various States monitor the progress.

In Delhi, it is the duty of the DJB to treat the city’s sewage.

Though the city generates 720 million gallons per day (MGD) of sewage, the Sewage Treatment Plants have a capacity of 597.26 MGD. Of the total capacity, 514.2 MGD is utilised (86%), leaving about 123 MGD of untreated sewage into the river, according to the DJB.

Multiple deadlines have been missed by the DJB too, though there is progress.

The DJB had told the NGT’s monitoring panel that it will increase the utilisation of the existing STPs to 99% by June 2019, but more than two years after the deadline, it stands at 86%.

Similarly, the Interceptor Sewer Project (ISP), which has been in the plans since 2006, has been delayed multiple times.

“Entire flow (of sewage in drains) shall be trapped and treated by March 2023 after construction/rehabilitation of Coronation Pillar, Rithala and Kondli STP under YAP-III,” reads a July report of the Delhi government, which states that the project is “completed”.

Similarly, there are around 1,700 unauthorised colonies in Delhi with a total population of around 40 lakh. Currently, only 561 of these colonies have sewer lines; in the other localities, sewage is dumped directly into the Yamuna via drains. In 595 colonies, work is in progress on laying sewage pipes.

Mr. Misra, however, said untreated effluents from industries are more toxic. “The government counts only the industries in the industrial area when they say all of them have Effluent Treatment Plants (ETPs), but there are hundreds of illegal industries in residential areas and all across Delhi, whose waste ends up in the Yamuna,” he said.

If there is more water in the river, it can dilute the pollutants. To assess the minimum required environmental flow of the Yamuna for the stretch between Hathinikund in Haryana to Okhla in Delhi, a study was assigned by the National Mission for Clean Ganga (NMCG) to the National Institute of Hydrology (NIH), Roorkee, in December 2018.

As per the final draft report of the NIH, a flow of 23 cusecs is needed in the lean season, but increasing the flow is not that easy due to existing interstate water treaties.

“Ministry of Jal Shakti has observed that the water-sharing agreement of 1994 between Uttarakhand, H.P., U.P., Haryana, Rajasthan and Delhi is due for revision in 2025 unless any of the States so demand, implying that no revision of water sharing will be possible to achieve the environmental flow in the Yamuna,” the July report reads.

“Zero untreated discharge into Yamuna is a tall order, considering that the DJB is notorious for giving deadlines and then extending it. But it can be done. For instance, to increase the flow of water, all States have to come together and think about the river and not them, but it needs political will,” Mr. Misra said.

As testing dips, cases too fall

Archana Archana’s new kalamkari collection is all about revival