The demands made by various trade unions and a few political parties, which include passing a resolution in the Assembly against the proposed strategic sale of Visakhapatnam Steel Plant, will be taken up with Chief Minister Y.S. Jagan Mohan Reddy and discussed at length, said YSR Congress Party MP V. Vijaya Sai Reddy.

Addressing a press conference here on Tuesday, he said that the trade unions and a few political parties also discussed about allotting captive mines to the VSP in the State, and this will also be discussed with the Chief Minister, he said.

Mr. Vijaya Sai Reddy, pointed out that the VSP was making losses mainly due to non-availability of captive iron ore mines and the heavy debt burden.

“The VSP has taken a huge amount of loans to fund its expansion project and it has been paying huge interest on the loans. If the loans are converted into equity and captive mines are allocated, the plant would make profit within a short time,” he said.

He also said that efforts are on to take the trade union leaders to the Chief Minister and also find a window to meet the Prime Minister.

Taking a dig at TDP president N. Chandrababu Naidu, he said, “Mr. Naidu tries to find some kind of political mileage in everything. But at times he should rise above politics to fight for the welfare of the people and the State. His response to VSP’s crisis was lukewarm and loaded with political brownie points.”

Mr. Vijaya Sai Reddy said that on February 20, a maha padayatra from the Gandhi statue, near the GVMC, will be taken up in support of the VSP employees and in protest against the privatisation move of the Union government.

The yatra would start from Gandhi statue at 8.30 a.m. and culminate at Kurmannapalem near the VSP at around 5 p.m., covering over 23 kilometres. A public meeting will be held at Kurmannapalem and all trade unions and like-minded political parties will be part of it, he said.

Tourism Minister Muttamsetti Srinivasa Rao said that when all political parties are coming on to one platform to fight for VSP, the TDP is staying away. “We even welcome the TDP to join us to fight the privatisation move of the VSP,” he said.

Taking a dig at Mr. Nara Lokesh, he said that his visit to Visakhapatnam was only an eyewash. “When he came to visit Palla Srinivas, former TDP MLA, who was on fast-unto-death, he did not care to meet the party workers, who were also on relay hunger strike,” he said.

Mr. Srinivasa Rao also said that Mr. Naidu tried to play a game by using the State Election Commissioner (SEC) in holding the panchayat elections. The results were counter productive, as YSRCP -backed candidates have swept both the phases. “Now Mr. Naidu will get a more bitter dose in the coming urban local body elections,” he said. 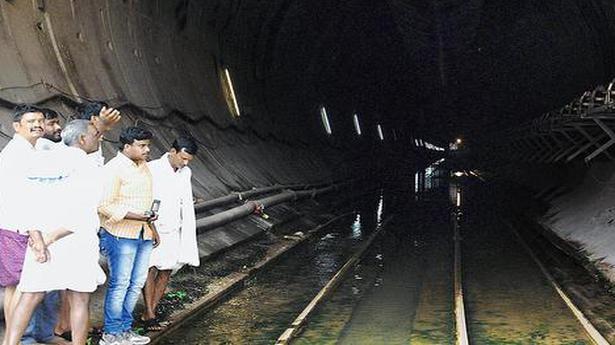