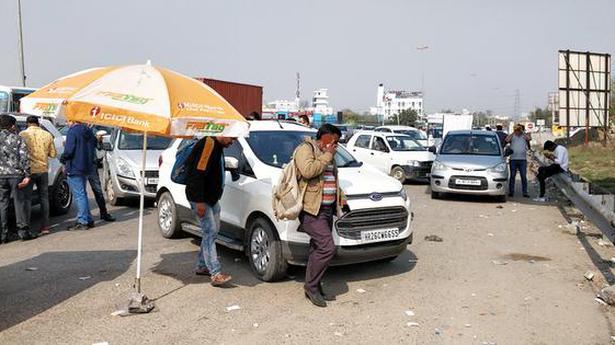 
Simi Puri, 37, a Sushant Lok-I resident here, had a FASTag installed on one of her two vehicles. But after the National Highways Authority of India made digital payments though FASTags at its toll plazas mandatory from February 16, she decided to get it installed on her second car as well.

But she was not alone to throng the Point of Sale near the Kherki Daula toll plaza in a bid to beat the NHAI deadline.

The Point of Sale on the roadside near the Kherki Daula toll plaza had an unusual rush of commuters on Monday.

Waiting for the FASTag to be installed, Ms. Puri said her Sports Utility Vehicle already had the FASTag installed, but she now decided to get in fixed on her car as well.

“This car is usually for the small distance, and the SUV is for long distance travel. But my husband asked me to get the FASTag installed on the car as well after he came to know about the NHAI deadline,” said Ms. Puri. The installation process, however, was quick and hassle-free. “It took just a few minutes,” said Ms. Puri.

Rohit, a salesperson at the PoS, said the sale of FASTags had doubled over the past few days.

He added that the FASTag was activated soon after it was installed with a balance of ₹100. “But the payment is accepted only through digital mode. The customer can recharge it again in another 30 minutes,” said Mr. Rohit.

As per the NHAI orders, all lanes of National Highway fee plazas have been declared as “FASTag lanes of Fee Plaza” with effect from 00:00 hours of February 16. The vehicles without valid and functional FASTag will have to pay fee equivalent to two times of the fee applicable to that category, as per the orders.

Shashi Bhushan, Project Director, NHAI, Gurugram, said many more kiosks to install FASTags were set up for the convenience of those still not having them equipped and adequate number of marshals were deployed to streamline the traffic in preparation for the roll out. “Already 80-85% commuters are making payment through FAStags. Besides, we have been conducting trials for 30-60 minutes for each shift everyday since December last year and collecting double the toll fee from those paying in cash. We have not faced much difficulty. Hope the roll out will be smooth,” said Mr. Bhushan.

Sohrab Khan, Manager Toll Operations, Millennium City Expressway Private Limited, said that around 10-15% commuters did not have active FASTags and could play the spoilsport. “Despite having installed the FAStags, 10-15% commuters don’t get them recharged. This is one challenge,” said Mr. Khan.

He added the company had made all preparations for the smooth roll out and installed up-to-date Radio Frequency Identification machines.

Polls to 11 Rajya Sabha seats in UP, Uttarakhand on Nov 9