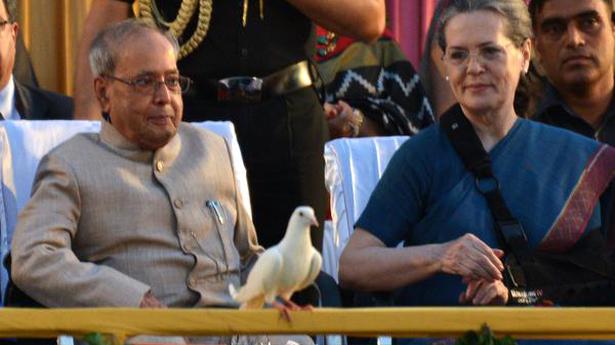 Sonia Gandhi was unable to handle affairs of the party, wrote late former President of India

The late former President of India Pranab Mukherjee, in the final volume of his yet to be released memoir, The Presidential Years, noted that the Congress had lost focus after his elevation as the President of India, and Sonia Gandhi was unable to control affairs of the party.

An excerpt of his memoir, scheduled to be released in January 2021, was released by Mr. Mukherjee’s publishers, Rupa, on Friday.

The excerpt also has a section on the late President’s assessment of the two Prime Ministers, Narendra Modi and Dr. Manmohan Singh, that he worked with.

Talking about Congress’ dismal performance in the 2014 elections, according to the publishers, Mr. Mukherjee wrote, “Some members of the Congress have theorised that, had I become the PM in 2004, the party might have averted the 2014 Lok Sabha drubbing. Though I don’t subscribe to this view, I do believe that the party’s leadership lost political focus after my elevation as president.”

“While Sonia Gandhi was unable to handle the affairs of the party, Dr. Singh’s prolonged absence from the House put an end to any personal contact with other MPs,” the former President added.

Mr. Mukherjee also talked about the style of functioning of the two Prime Ministers with whom he was associated, first as a Cabinet minister and then as the President.

“I believe that the moral authority to govern vests with the PM. The overall state of the nation is reflective of the functioning of the PM and his administration. While Dr. Singh was preoccupied with saving the coalition, which took a toll on governance, Modi seemed to have employed a rather autocratic style of governance during his first term, as seen by the bitter relationship among the government, the legislature and the judiciary. Only time will tell if there is a better understanding on such matters in the second term of this government,” he noted.

He also revealed a “minor diplomatic” issue that arose during the 2015 visit of U.S. President Barack Obama and the U.S. Secret Service’s insistence that the two Presidents travel in a specially armoured vehicle that had been brought along from the U.S., and not in the car designated for use by the Indian head of State.

“They wanted me to travel in the same armoured car along with Obama. I politely but firmly refused to do so, and requested the MEA (Ministry of External Affairs) to inform the US authorities that when the US president travels with the Indian president in India, he would have to trust our security arrangements. It cannot be the other way around,” the excerpt read.