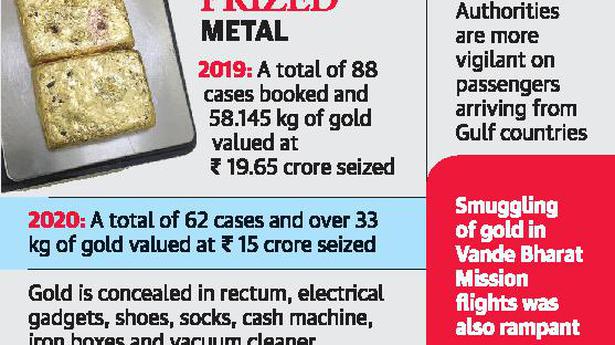 Over 35 kg valued at ₹ 15.1 crore brought through RGIA from Gulf countries so far this year

Gold continues to shine through the contraband routes despite COVID-19 restrictions on international travel that had grounded airlines for a major part of the year.

The glitter of yellow metal had lured the smugglers to bring over 35 kg valued at over ₹ 15.1 crore to Rajiv Gandhi International Airport, Shamshabad from Gulf countries so far this year with their time-tested modus operandi. Customs officials have registered 62 cases this year, while they booked 88 cases in 2019 seizing 58.145 kg of gold valued at ₹19.65 crore from the in-bound passengers. The constant spurt in gold demand in both the Telugu speaking States and neighbouring Karnataka is cited as one of the reasons for constant smuggling of gold through illegal channels.

Sources in the Customs told The Hindu that carriers are devising innovative methods to smuggle the gold from abroad by risking their lives. They said that rectum concealment was the preferred mode of smuggling, apart from other methods including concealing the gold in clothes, electrical devices and trolley bags.

“A few minutes before landing, the carrier goes to the lavatory to conceal the gold paste capsules in their rectum and hand over the same to the smuggler if they manage to escape from our radar,” the officer said. Everyday the smugglers try half-a-dozen techniques to sneak out the gold from the airport by not getting caught to the enforcement officials.

While people who smuggle in the contraband in cash machines, vacuum cleaners, iron boxes, mixers, trolley bags, and other gadgets are mostly tourists who were lured by the smugglers in Dubai and other countries to carry out the ‘operations’. Those who get caught with ‘old-school’ techniques like hiding the gold bullion in undergarments, socks, shoes and trousers secret pockets are mostly individuals (migrant workers) who buy the gold at a cheaper price for their friends and family members or to sell it in the local market to make some profit.

Recently, customs officials apprehended a man who concealed 12 cut pieces of gold weighing 71.47 grams inside the zipper of his jeans. While on Saturday, they booked a woman passenger who attempted to smuggle five gold bars weighing 1.42 kg and other jewellery weighing 583 grams in her baggage. 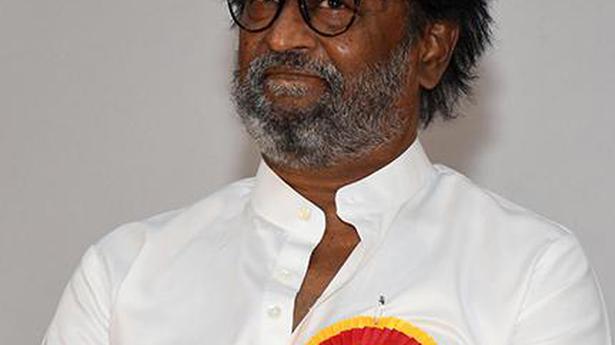 Anti-BJP platform to be launched from Telangana: KCR