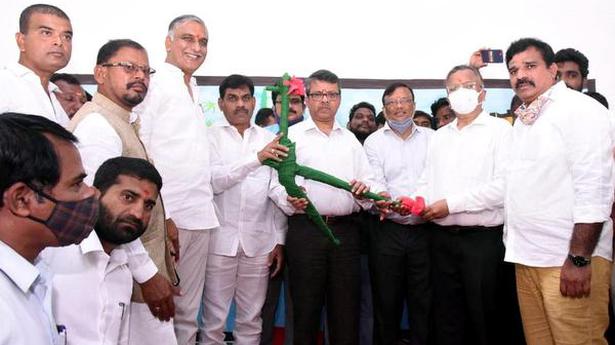 Participating in several programmes held at Gonglur village of Pulkal mandal along with MP B.B. Patil and MLA Ch. Kranthi Kiran on Sunday, Mr. Harish Rao said that I-T officials have adopted the village and taking up several developmental activities and now it was the turn of villagers to cooperate.

He inaugurated Gandhi Seva Centre, constructed at a cost of ₹12 lakh, by the tax officials. He also examined the proposals for construction of a mini tank bund in the village.

“I-T officials coming to the village and taking up developmental activities, despite being busy, is appreciable. They are spending their time and money for the village. Peddacheruvu in the village is being developed as a mini tank bund. I appreciate the villagers for producing Manjeera surf and soaps with the help of these officials. I am sanctioning a grinding machine to prepare pulses. Sell best quality pulses with the brand name of Manjeera and compete with open market,” said Mr. Harish Rao while addressing the villagers in a meeting.

Later in the day, the Minister inaugurated a Rythu Vedika, visited a temple and offered prayers.

Earlier in the day, the I-T officials met Mr. Harish Rao at the Collectorate, where the latter explained about Kaleshwaram, Mission Bhagiratha, Rythu Bandhu, Rythu Bima and other welfare schemes being implemented in the State.