Three days after the alleged assault on a group of youngsters by the Fort Kochi police, three officers were transferred with immediate effect on Wednesday.

Among those who were transferred were Sub Inspector C.R. Singh, who was hardly 10 days in his post, and civil police officers Sunil Kumar and Gireesh. Additional Commissioner (Kochi City) K.P. Philip issued the order transferring them to Thoppumpady, North and Elamakkara stations respectively, said sources. Mulavukad Sub Inspector K.P. Manesh has been roped in as a replacement.

Fort Kochi Station House Officer G.B. Manuraj had submitted a report on the incident to Mattancherry Assistant Commissioner G.D. Vijayakumar who in turn forwarded it to Mr. Philip with his own take.

All the three transferred officers were part of a police team accused of beating up a group of youngsters who had assembled at a ground adjoining a closed godown near Customs Jetty at Fort Kochi on Sunday evening. There was a public revolt against the alleged police brutality after five youngsters had to be admitted to hospital leading to a protest march to the Fort Kochi police station on the night of the incident.

The protesters left after Mr. Vijayakumar assured them of appropriate action against the officers concerned.

Just like in the immediate aftermath of the incident in which both the victims and the alleged perpetrators presented contradictory versions — while victims claimed that they had assembled for playing cricket and were brutally beaten up by the police without warning, the police dubbed the youngsters anti-social elements and attributed injuries to be sustained while trying to flee them — neither party seems satisfactory about the purported punitive action either. 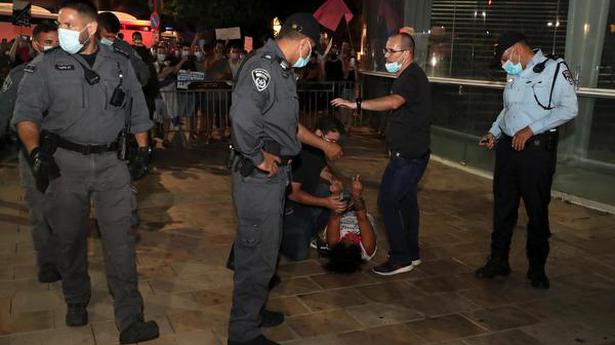 Thousands of Israelis protest against Netanyahu despite lockdown

A few puffs and some quick bucks