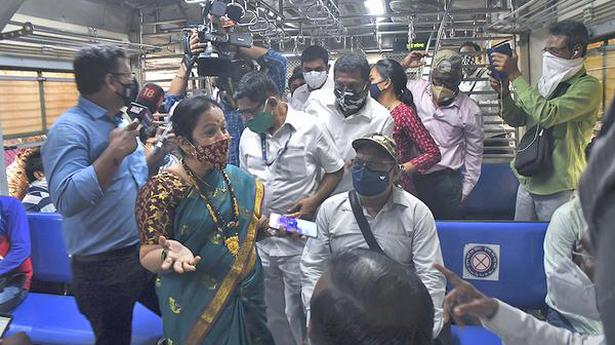 
Fresh cases continued to soar in Maharashtra, with 4,878 new Covid-19 cases recorded on Wednesday as opposed to 3,853 patients being discharged.

After more than a month of reporting relatively low cases, Pune reported over 800 new cases to take its total case tally to 3,96,571. As per State Health Department figures, four deaths were reported as the total death toll remained at 8,018.

However, as per district authorities, the active case tally rose to 4,835 with a recovery rate of 96.47%.

Mumbai Mayor Kishori Pednekar, who earlier warned that the city would go under a lockdown if people continued to flout pandemic norms, personally travelled in a local train today to check if regulations were being followed and to spread awareness about use of masks. Before boarding the train at Byculla station, Ms. Pednekar took errant citizens and vendors to task for violating norms.

Nagpur district in Vidarbha reported more than 500 new cases, taking the district’s case tally to 1,41,375 of whom 4,590 are currently active. Seven deaths saw the fatalities rise to 3,437.

Rising cases in Vidarbha, especially Nagpur, Amravati and Buldhana have contributed to around 30% of the latest surge across the State, causing authorities to discourage assemblies and large gatherings.

In western Maharashtra, the pandemic still appeared to be relatively under control. Satara reported no deaths while 86 fresh cases saw the case tally rise to 57,639 of whom just 833 are active. The death toll in the district stands at 1,833.

Neighbouring Sangli reported just 15 cases and one death as the district’s reported cases reached 51,104 of whom only 525 are active. Its death toll stands at 1,789.

In north Maharashtra, Nashik district reported more than 200 cases and three deaths as its case tally reached 1,24,308 of whom 961 are active. Its death toll stands at 2,023.

Jalgaon reported 77 new cases and no deaths as its case tally reached 58,248 of whom only 603 are active, while its death toll remained constant at 1,492.

Dr. Awate informed that currently 1,95,704 people across the State were in home quarantine and 1,664 were in institutional quarantine facilities.

BJP launches ‘justice for Sushant’ ahead of Bihar poll

Centre yet to assess losses of J&K’s tourism sector