‘Wait and watch’ attitude, vaccine hesitancy and technical glitches keep the numbers down.

With State governments reporting shortfalls in meeting their COVID-19 vaccination targets, the experience of the last couple of days has made one thing clear — uptake of the vaccines against COVID-19 in the first phase among healthcare and frontline workers is uneven.

Health authorities in various States cite a “wait and watch” approach as the main reason. With the vaccination itself being voluntary, it is estimated that people are waiting to see how those who have already received the vaccine fared. What is also clear now is vaccine hesitancy even among medical professionals. In some districts in the country, the Covishield vaccine was dispensed much faster than Covaxin, district-level figures show. Technical glitches in the CoWIN app were also blamed for poor vaccine coverage.

Tamil Nadu recorded just over 16% coverage on January 16, the first day. Health secretary J. Radhakrishnan acknowledged that there seemed to be a “wait and watch” trend. “We are continuing with the vaccination even if there is sluggish uptake. Some associations of health professionals have promised to come for vaccination after one or two days. We expect the response to improve after the weekend,” he said.

He himself took a Covaxin shot on Sunday morning to encourage others to come forward and receive the vaccine, of which only 99 doses were administered on day 1 and 183 doses on day 2. A total of 6,156 shots (of both vaccines) have been given in the State over two days, while the actual capacity was over 30,000 doses.

In Andhra Pradesh, the Health Department planned to vaccinate nearly 32,000 beneficiaries at 320 session sites across the State on the first day, and only 61% of them or 19,108 were given vaccine shots due to various reasons. Delay caused by technical issues has been the major issue. On the second day, a target of vaccination for 27,009 beneficiaries at 312 session sites was fixed, but by 8.30 p.m. only 13,041 (47.8%) persons were vaccinated. The State has been using only the Covishield vaccine.

Coronavirus | Some didn’t turn up for COVID vaccination at the last moment in Delhi: Health Minister Satyendar Jain

A total of 8,062 healthcare workers in Kerala received the COVID-19 vaccine on launch day, at 133 sites across the State. Vaccination will resume on Monday. The target fixed for the launch day was 11,138 persons. In many sites, 70-90% of the target was achieved, with some who had registered earlier being dropped as they did not fit the criteria (for instance, pregnant or lactating mothers, and individuals with serious allergies) that changed after registration. State Medical Board Chairman Santhosh Kumar said there seemed to be a lot of apprehensions among healthcare workers regarding the side effects profile, which definitely affected the numbers.

Maharashtra Health Minister Rajesh Tope said on Sunday that persisting technical difficulties in the Co-WIN app had led to the suspension of the vaccination drive until Monday. As many as 18,425 beneficiaries, or 65% of the target for the first day, were given vaccine shots across the State on Saturday.

Telangana had planned to vaccinate 4,296 healthcare workers at 140 vaccination session sites across the State on the first day, and 3,962 people took the shot. Without specifying the number, State Director of Public Health G. Srinivasa Rao said on Saturday that some healthcare workers refused to take the vaccine on the first day out of fear or anxiety, and had said that they would like to be immunised after two to three days.

West Bengal managed to vaccinate 15,707 candidates out of the scheduled 20,700 persons on January 16. Explaining the reasons for the shortfall, Director of Health Services Ajay Chakraborty said that the Co-WIN app through which the message was sent to people had developed glitches from Friday. Since the message could not be delivered to all the people, some did not turn up, he said.

Delhi’s Heath Minister Satyender Jain on Sunday said that 53.3% of those who were scheduled to receive the vaccine on the first day showed up in the Capital. Commenting on the turnout, Mr. Jain said: “Some people decided not to turn up at the last moment. The vaccination programme is completely voluntary. We cannot ask anyone to compulsorily take the shot even if the person has registered for it.” No vaccinations were carried out on Sunday.

Odisha achieved among the highest levels of coverage. The government said it had received encouraging response from frontline health workers, with 85% of registered persons turning up on Saturday. “This is in our expected line. We had planned vaccination for 16,405 persons and 13,980 received the COVID-19 vaccine on the first day,” said Bijaya Kumar Panigrahi, Director of Family Welfare. In seven out of the 30 districts of Odisha, 100% vaccination target was achieved, while in five districts over 90% health workers came forward to receive the shot. He added that all those registered for Covaxin had taken it.

Rajasthan too reported among the higher turnouts in the country, with 73.8% of planned vaccination taking place. On Saturday, 12,258 people received the vaccine against a target of 16,613. No vaccination was conducted on Sunday as the State government has decided carry out the vaccinations on four days a week. There will be no vaccination on Thursdays, Sundays and public holidays. Laxman Singh Ola, Director, Family Welfare, also reported problems with the app, citing it as the reason for those who did not turn up. Srikalahasti all set for Jagan visit 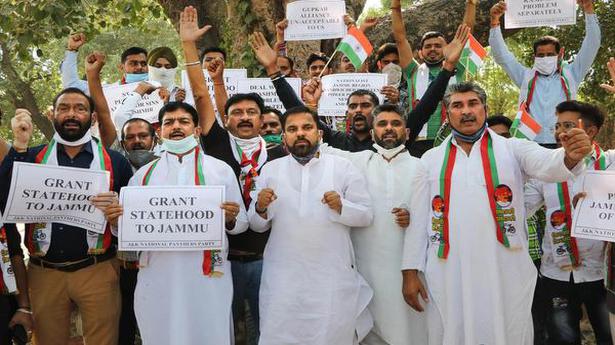