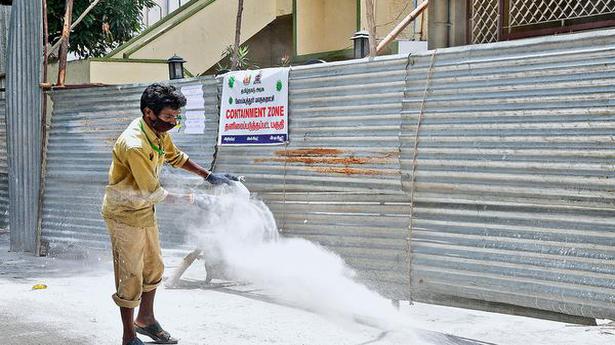 As many as 4,729 patients were undergoing treatment in different hospitals and COVID-19 Care Centres (CCC) in the district on Saturday.

According to officials with the Health Department, the number of positive cases per day will continue to remain high this week.

As per the media bulletin issued by the Health Department, a 63-year-old man from Coimbatore who was admitted to the Coimbatore Medical College Hospital on August 30 succumbed to COVID-19 on Thursday.

On Saturday, 366 persons who recovered from the disease got discharged from different hospitals and CCCs.

As many as 250 positive cases were reported in Salem. Health officials said 249 were indigenous cases, including 178 in Salem Corporation limits and one patient has returned from Namakkal. Four patients affected with the disease who were undergoing treatment at the Government Mohan Kumaramangalam Medical College Hospital and private hospitals died.

District Collector K. Vijayakarthikeyan on Saturday issued a warning to the residents that walking in public places without a mask will attract a fine of ₹200 and those spitting in public places will be fined ₹500. The police and the local bodies will levy the spot fines. Repeat offenders will be booked under the Disaster Management Act, the Collector said in a release.

Among the fresh cases reported on Saturday were employees from three garment industries – two in Avinashi block and one in Gudimangalam block.

Mr. Vijayakarthikeyan chaired a meeting with industrialists from the district regarding precautionary measures amid the growing COVID-19 cases within industries.

The district’s overall tally stood at 3,305 cases. A total of 96 patients were discharged from various hospitals upon recovery.

A total of 60 persons were discharged on Saturday while 1,228 persons continue to be under treatment.

One person died taking the death toll, so far, to 46.

A total of 88 persons tested positive in Krishnagiri. This has taken the total number of cases to 2,478 and number of active cases to 506 in the district.

In Namakkal, 86 cases were reported. According to officials, the affected persons include two police personnel.