Footwear industry suffering due to its closure and sit-in stir, they write to NHRC

The Bahadurgarh industrialists have written to the National Human Rights Commission seeking directions to the Delhi police to de-seal the Tikri border, the site of farmers’ agitation against the farm laws for the past over nine months.

Narinder Chhikara, vice-president, Bahadurgarh Chamber of Commerce and Industry (BCCI), in his complaint, said the industry in the town bordering Delhi was suffering due to the sealing of the border by the Delhi police. Bahadurgarh, the hub of non-leather footwear industry in the country, is a major industrial town of Haryana with 9,000-odd micro, small and medium units.

Mr. Chhikara said the industry, already having suffered due to the national lockdown in March last year, had incurred losses to the ₹2,000 crore due to the ongoing farmers agitation.

He claimed that around 2,000 units, mostly in Part-B of the Modern Industrial Estate of the town, were hit the most and a large number of them were completely shut.

He said the industrialists and the workers mostly commuted to work from Delhi and had to take a detour to reach the units when earlier it took them just a few minutes to cross over to Bahadurgarh.

Mr. Chhikara said the industry was also dependent on the national capital for supply of raw material and sale of the finished goods.

He also pointed out that the common man was also harassed due to the sealing of the border and emergency vehicles such as ambulances and fire tenders had difficulty in movement. 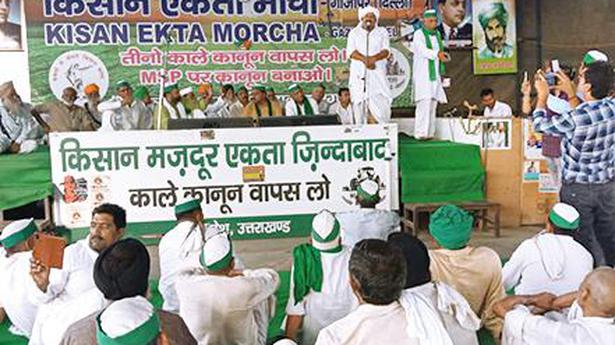 Farmers back at Ghazipur border