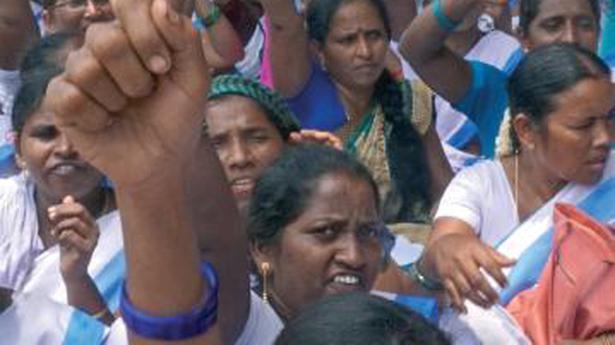 
The ASHAs and anganwadi workers have been working for decades but their working conditions have not improved much except for a marginal increase in their wages after prolonged struggles over the years. The nominal hike in wages has been offset by the steep increase in work, reduction of funds and placing their services at the disposal of two different departments.

They risked their lives visiting the homes of COVID-19 patients to ensure that the patients complied with the guidelines, and to collect data on the pandemic.

Their travails are unimaginable in remote rural areas and Agency areas, where they do not have adequate public transport and have to walk across difficult terrains to visit houses for door-to-door surveys, say the health activists.

Mangamma of Paderu began her career as a community health worker (CHW) in 1997 and in 2006, she was identified as an ASHA. “I have to cover 98 households, with a total population of 358, in Nakkaputtu hamlet near Paderu. I am given barely 10 tablets (paracetamol) as against the requirement of 100 for distribution to the beneficiaries. I have to visit all the houses once in two days apart from maintaining the records,” she says.

“We have to keep the pre-school children engaged at the anganwadi centre from 9 a.m. to noon by telling them stories, making them identify colours and other simple things apart from drawing. The weight of every child and pregnant woman has to be taken once a month and pregnant women have to be told about the importance of taking nutritious food,” says M. Nagaseshu, general secretary of the Anganwadi Workers and Helpers’ Union.

“All the data pertaining to the mother and child has to be uploaded on the apps of both the State and Central governments separately. An Anganwadi Helper has to cook food at the anganwadi centre and an Anganwadi Mini Worker, who is posted in less populated areas, has to take care of both cooking and teaching the pre-school children,” she says.

“Chief Minister Y.S. Jagan Mohan Reddy has increased the remuneration of ASHA workers but they

are now attached to the newly created secretariats and made answerable to both secretariat and the Medical and Health Department which is putting them under a lot of pressure,” says P. Mani, honorary president of AP ASHA Workers’ Union (CITU).

“The funds under the National Health Mission (NHM) are being reduced by the Modi government for the last six years and the Centre even failed to pay ₹1,000 promised for the COVID-19 pandemic period. ASHA workers, who succumbed to COVID-19 have not been paid insurance,” she laments. Toll surges to 606 as 19 die in Nellore, Prakasam in a single day

One thought on “Decades of service does them no good?”