Karnataka
January 15, 2021 Divya Bharat 0 Comments BengaluruA. Alam Pasha, complainant in a case alleging corruption against Chief Minister B.S. Yediyurappa and Minister Murugesh Nirani into which the High Court of Karnataka recently allowed a probe, demanded that both the leaders should immediately resign so that “they do not frustrate the investigation and criminal proceedings against them”.


A. Alam Pasha, complainant in a case alleging corruption against Chief Minister B.S. Yediyurappa and Minister Murugesh Nirani into which the High Court of Karnataka recently allowed a probe, demanded that both the leaders should immediately resign so that “they do not frustrate the investigation and criminal proceedings against them”.

“They occupying powerful positions in the government will prove to be an impediment for a fair probe,” he said, addressing a press conference on Friday.

Significantly, this comes within days of Mr. Nirani being sworn in as a Minister and before Union Home Minister Amit Shah’s scheduled inauguration of his sugar factory in Bagalkot district on January 17.

Mr. Pasha alleged forgery and corruption in the process of withdrawal of 26 acres of industrial land allotted to him near Devanahalli when Mr. Nirani was Industries Minister in the previous BJP government. The Lokayukta police had filed a chargesheet in the case against the two leaders and other officers. However, the High Court had quashed criminal proceedings against them in 2013 on the grounds that there was no prior permission for prosecution. Mr. Pasha later filed a private complaint in the case in 2015, which was challenged by Mr. Yediyurappa. Mr. Yediyurappa’s petition was recently dismissed by the High Court saying there was no bar on the complainant to file a fresh complaint.

However, Mr. Nirani hit back at Mr. Pasha, and defended the government’s action of withdrawing the allotment of 26 acres of industrial land to him in 2011. “The allottee failed to pay ₹9.36 crore towards 20% of the cost of land allotted, despite several requests by the KIADB. The financial audit of the company revealed that the firm had no capacity to carry out the project and hence the allotment was cancelled,” Mr. Nirani said, adding there was no foul play in the case and they would fight the same legally.

Mudukuthore temple reconstruction to be completed in 2 years 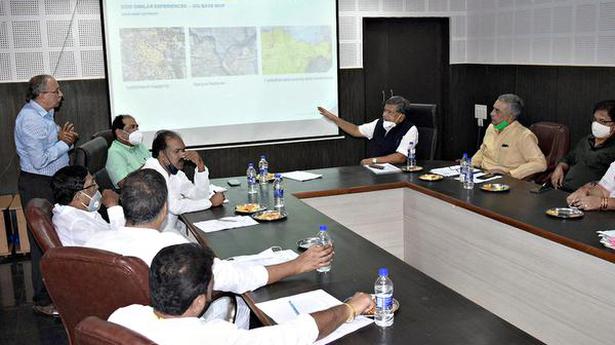 CDP to be modified as per GIS

Akkamahadevi’s birthplace to be developed: CM