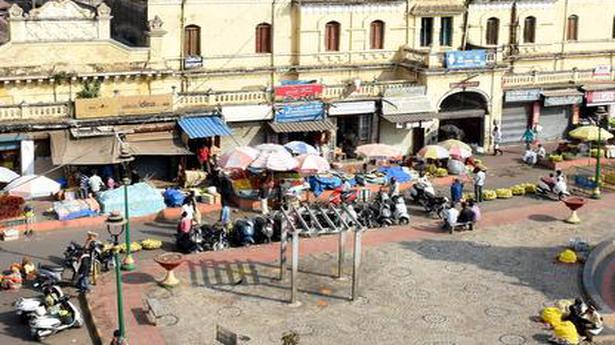 A technical committee report has come in handy for the heritage experts in the city to reiterate their demand to conserve the Devaraja Market which is more than 125 years old and condemned for demolition.

The soil bearing capacity report submitted by the technical committee indicates that the ground on which the market stands today, was not only loose but there was seepage in some parts. Hence any new construction can take place only after the soil and the ground was strengthened and stabilised, as per the report.

The Mysuru City Corporation (MCC) Commissioner Gurudutt Hegde told The Hindu that soil samples were taken after digging 3 trial pits and the report has been forwarded to the government for its decision. He said civil and structural engineering experts will give inputs to reinforce and stabilise the ground but this will increase the construction cost of the new market which at present, is pegged at ₹70 crore.

He said under the current circumstances of pandemic and with the economy having taken a battering due to the lockdown, it may be difficult for the State to release so much of money at one go.

Meanwhile, heritage experts see the technical committee report on the soil bearing capacity as an opportunity to reinforce the wisdom of conserving the Market. ‘’When the soil is unstable and it is known that the Sayyaji Rao Road and Devaraja Market have been constructed on a land stabilised with ash and stone, a new market with multi-level parking facility at the basement was fraught with danger and would shore up the construction cost manifold’’, said N.S. Rangaraju, convenor, Mysuru chapter of Indian National Trust for Art and Cultural Heritage (INTACH).

He said it would be prudent to conserve the heritage structure at a fraction of the cost and it could serve public purpose for at least another 50 to 75 years. There are examples of heritage buildings restored in the city in recent years and they include the Jayalakshmi Vilas Mansion, Dr.Radhakrishnan’s Bungalow, and Jaganmohan Palace, said Mr. Rangaraju.

The proposed multi-level parking facility at the basement of the new structure has also raised concern over its impact on the heart of the city which is already choking with traffic, noise and air pollution. Urban experts aver that instead of reclaiming the heritage area by dispersing growth to the outer periphery and diverting traffic away from the city centre, the local authorities will add to the mess by drawing additional traffic to the core area which is already an eyesore.

The debate on the reconstruction and conservation of Devaraja Market is on since nearly two decades. To make the matters worse, various expert committees have submitted reports that are in favour of conservation as well as demolition. Though the MCC has passed a resolution supporting its demolition to pave way for a new building, the issue is far from settled as the tenants of Devaraja Market have approached the court where the issue is pending.