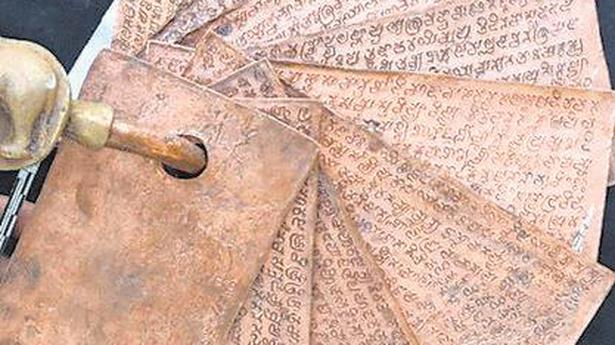 
A slew of copper plate inscriptions dated to the 8th and 9th century CE have been discovered in and around Halebelagola in Channarayapatna taluk of Hassan district in the recent months.

The discovery has been described as significant by scholars as it adds to the corpus of information pertaining to the age and provides additional material evidence for the understanding of the social and economic conditions of the region.

The former Director of the Epigraphy Branch Ravishankar who shared some of these discoveries said many such set of copper plates have also been discovered during renovation exercise at Srisailam in Andhra Pradesh and belong to the period of the Vijayanagar rulers and Gajapati kings of Odisha.

He said 17 sets of copper plates with 122 leaves were found while taking up the earth work for conservation of a Jain basadi at Halebelagola. This is reckoned to belong to the period of the Western Ganga king Sripurusha and is written in Sanskrit and Kananda and has Kannada characters of the 8th century CE. It records the gift of a village Sokanevadi as “Brahmamdeya” to a brahmin Sokanebhatta of Koushika gotra by Sripurusha.

Another inscription belonged to the Western Ganga king Rajamalla II and is dated to 879 CE. This also registers the gift of a village Agalivolal by the king for renovation and conducting of festivities in Satyavaka Jinalaya. It also states that the gift was entrusted to the preceptor Gunasenadeva of Mulasamgha. Similarly, another village Jayavur was gifted for renovation and conducting worship in Sivayya Jinalaya of Kabappu Teertha at the request of the king’s minister Sivayya.

“These discoveries are significant and some of the copper plates dates range from 6th century CE to the medieval and late medieval period, including Vijayanagar period and other dynasties who ruled in southern India,” said Mr. Ravishankar. He said these copper plates are generally discovered accidentally in the course of field work and digging to restore or renovate a temple or a monument.

“New kings and new dates have come to light and such discoveries add many new pages to history of the region which has already been documented,” said Mr. Ravishankar.

K. Munirathnam Reddy, the present Director of the Epigraphy Branch, confirmed the recent discoveries but said further study and analysis to ascertain the context and other details in which the copper plates may been issued and their publication will take time.

Man kills toddler, born out of wedlock, to protect career