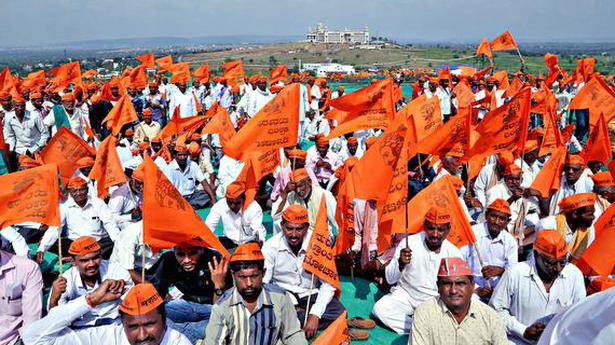 The opposition to Karnataka government setting up a development corporation for Marathas is misplaced and arises out of misunderstanding, say community leaders and scholars.

The misunderstanding is between the terms “Maratha”, which signifies a group of castes, and “Marathi”, the language spoken by several communities in Maharashtra and some border districts. Marathas have mostly remained a backward group and deserve government benefits, say community leaders.

“Most Marathas from my generation have studied in Kannada medium schools. We belong to Karnataka. Some of our relatives may be in Maharashtra, but we are proud to identify ourselves as Kannadigas,” said Vilasrao More, advocate and leader of the Maratha Kshatriya Samaj from Basava Kalyan. Mr. More, who has worked as a Karnataka government pleader in the past, said parties like MES which have been demanding merger of Belagavi with Maharashtra have never been stakeholders in the development of the Maratha community.

Kiran Jadhav, leader of the Maratha Kshatriya Yuva Manch, said most of the sub-castes among Marathas remain poor and backward. Except five to six dominant sub-castes, most Maratha communities are backward, he argued. “They suffer from illiteracy and live a hand-to-mouth existence. They hardly own land or assets and they would definitely benefit from government schemes,” he said.

Sarju Katkar, a Kannada writer who belongs to one of the Maratha sub-castes, said people mistakenly think the corporation is meant for Marathi language groups, which is far from the truth. He added that the newly-formed body should focus on giving scholarships, building hostels, and disbursing easy loans to entrepreneurs.

Kannada activists in Belagavi suspect this is a pre-poll gimmick to influence Maratha voters in Basava Kalyan and Belagavi that are facing bypolls, but are not opposed to the idea per say.

“Our stand is clear. We want the government to set up such bodies for other caste groups only after it has strengthened long-standing ones like the border development commission. The Chief Minister’s step may be well intended, but it is ill timed,” said Ashok Chandaragi, a Kannada activist.

However, in the absence of a caste census, no one seems to have a clear idea about the numerical strength of the community.

In a memorandum submitted to the State government in 2018, the Karnataka Maratha Kshatriya Samaj (KMKS) had claimed that there were over 50 lakh Marathas in different districts of Karnataka. They had sought re-categorisation of the group to 2A from 3B of the backward classes list. “That demands still stands, but we welcome the plans to establish the authority,” said Anil Benake, MLA and KMKS leader.

It is widely believed that the term Maratha is a federation or an umbrella term that includes 96 sub-castes.

Maratha communities believe that they are “Shahan Nau Kuleen” or one among the 96 sub-castes. Though all of them agree on the number 96, they don’t seem to agree on which sub-castes are included in the group.

Some among the sub-castes are Kunbis, farmers, Dhanagar or shepherds, Lohar or blacksmiths, Sutar or carpenter, Koli or boat men, Bhandari, and Thakar. Patils or Paatidars are landowners who own the Patta or a land revenue record. They can be from any of these sub-castes.

CM lashes out at Pawar

Chief Minister B.S. Yediyurappa on Wednesday lashed out at Maharashtra Deputy Chief Minister Ajit Pawar for his remark that the Marathi-speaking regions of Karnataka should be included in Maharashtra and asked Mr. Pawar to not fan public sentiments.

On formation of the Maratha Development Corporation, he said the controversy was unnecessary and pointed out that many Marathas had participated in the World Kannada conference.

Meanwhile, Leader of the Opposition Siddaramaiah hit out at the priorities of the government in a series of tweets. He sought to know how a government that claimed to have no money for social security schemes had the money for setting up caste boards and corporations with an eye on the vote bank. He said the controversy was unnecessary. Crops on 29,529 hectares of land damaged in incessant rainfall