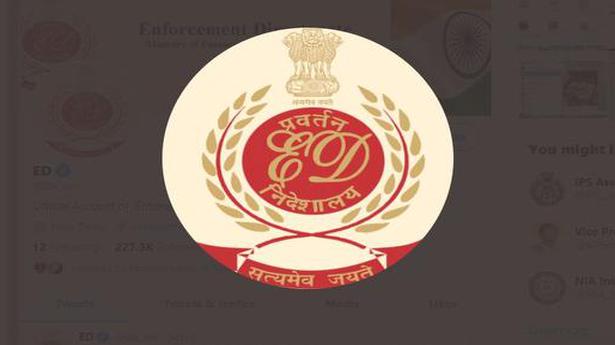 Searched locations include that of former State Chief Secretary.

The Enforcement Directorate has conducted searches at multiple locations in Bhopal, Hyderabad and Bengaluru as part of its money laundering probe in the over ₹3,000-crore alleged e-tender rigging racket of Madhya Pradesh, official sources said on Thursday.

They said the agency launched the searches to collect evidence early this week at locations of various suspects involved in the case, and the action is being conducted under the Prevention of Money Laundering Act (PMLA).

At least 15-16 locations in Bhopal, Hyderabad, and Bengaluru have been searched, including that of the former Chief Secretary of Madhya Pradesh. Searches were underway at some places on Thursday, the sources said.

The Enforcement Directorate (ED) had filed a criminal case last year to probe the instance where it was alleged that the e-tender portal of the State government was hacked to manipulate tenders and grab contracts, and it was allegedly done when the BJP was in power.

A case was first filed by the Economic Offences Wing (EOW) of the Madhya Pradesh Police when the previous Congress government under Chief Minister Kamal Nath was in power in the State. The ED studied this FIR to file the case under the PMLA.

The EOW has filed cases against directors and marketing representatives of seven companies, unknown officials of five State government departments and certain politicians.

They were charged under IPC section 420 (cheating), the Information Technology Act, and the Prevention of Corruption Act.

Some officials of Bhopal-based OSMO IT Solution, which issued ‘signature certificate’ for e-tenders, too were charged.

Some officials of two software firms which developed the e-tendering portal of the M.P. Electronic Development Corporation are also under the scanner for leaking information which allowed hacking of the portal, EOW officials had said.

The companies allegedly hacked the M.P. e-tendering portal to quote lowest rates and bag projects worth ₹3,000 crore between January and March, 2018.

These tenders were later cancelled.