Elaborate arrangements have been made for the three-tier local body elections to be held in Malappuram on Monday.

With 33.54 lakh voters and 8,387 candidates seeking election to 94 grama panchayats, 12 municipalities, 15 block panchayats, and the district panchayat, Malappuram remains the biggest in the State by all means.

As many as 3,975 polling stations have been set up in the district, and they will be manned by 19,875 officials. Around 31,000 officials are engaged in election duty at different levels. While 3,459 polling stations are in panchayats, 516 are in municipalities.

The Election Commission has declared 100 polling stations as sensitive. Webcasting of the polling process will be done live from 56 polling stations, and video coverage will be arranged in the remaining 44.

Distribution of polling equipment will be done from 8 a.m. on Sunday. Time slots have been allotted for officials to avoid crowding in view of COVID-19 scare. District Collector K. Gopalakrishnan requested officials and voters to maintain COVID-19 norms throughout the elections.

He said 18,507 special votes were cast by those in isolation. Special votes will be permitted until 3 p.m. on Sunday. Those testing positive for SARS-CoV-2 and those entering quarantine after 3 p.m. on Sunday will be allowed to vote on Monday evening. They should reach their respective polling stations before 6 p.m. wearing personal protective equipment (PPE).

Voters can use any of the following documents for identification: voter identity card issued by the Central Election Commission, passport, driving licence, PAN card, Aadhaar card, SSLC book with photo in it, bank passbook with photo issued six months before the election, and the State Election Commission’s identity card issued for the newly enrolled voters.

District officials said voters should wear mask at polling stations and should stay away from bringing children to polling booths. Hands should be sanitised before entering the polling station and after voting. People have been advised to carry a pen to sign in the polling register.

Officials can get to know details of their posting from www.edrop.gov.in, said an official statement. Information about their posting will also be sent through SMS. A special Poll Manager mobile application has been arranged for polling officials.

Additional District Magistrate N.M. Meharali warned that stern action would be initiated against those who shirk election duty. 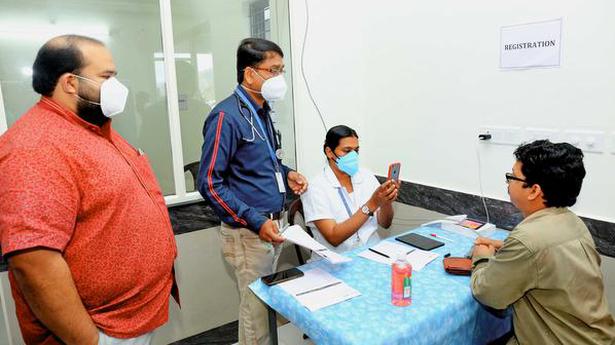 296 get vaccine dose in Idukki