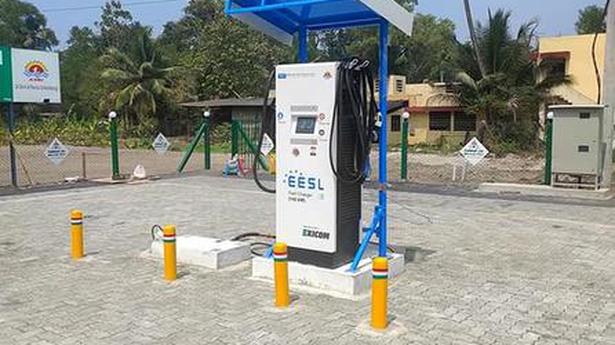 
An electric vehicle charging station set up on the premises of Autokast Limited, a ferrous foundry manufacturing unit in the public sector at SN Puram, near Cherthala, was thrown open to the public.

Industries Minister E. P. Jayarajan virtually inaugurated the charging station and an arc furnace for constructing bogies for railways at Autokast on Sunday.

Speaking at the function, Mr. Jayarajan said that the Left Democratic Front (LDF) government had revived the Public Sector Undertakings (PSUs) in the State. “Through diversification and modernisation, Autokast has become one of the best PSUs in South India. Besides steps to modernise the unit, measures taken to reduce the production cost is equally appreciable,” the Minister said.

Mr. Jayarajan said that the production had touched 400 tonnes in December 2020 and Autokast would achieve its target of 500 tonnes per month soon.

Finance Minister T.M. Thomas Isaac launched the construction of a two-megawatt solar plant at Autokast. Being set up at a cost of ₹10 crore, the solar plant is expected to save a considerable amount in electricity charges.

Autokast, once listed for privatisation, has made a remarkable turnaround with the present LDF government injecting money into the company.

The company, which bagged a pilot order for manufacturing five Casnub bogies for goods trains in 2019, is all set to handover the first batch of Casnub bogies to Indian Railways later this month.

Bamboo Corporation to set up plantation on five acres

Vaikom boat jetty to be restored