In response to reports of a recent protest by Hindutva outfits seeking a CID inquiry into the death of two women working at the University of Agricultural Sciences (UAS), Dharwad, in a road accident in Uttara Kannada district, the university has clarified that the employees were not on official duty on the day of the accident.

In a press release, the administrative officer of UAS, Dharwad, Vidyadhar G. Gulaguli, clarified that M.A. Mulla, U.B. Mestri, both permanent employees of the university, Meghana Singanath, who worked at the university through an outsourcing agency, and Rekha Kokkatanoor, who worked as a research associate under the IDP project on a temporary basis, had not gone to Uttara Kannada on official duty on January 31. They also had not taken an official vehicle for their travel.

The officer clarified that they had not provided any information to the university about their private travel. And during this period, the Vice-Chancellor of the varsity had travelled to Kerala on an official programme and had returned directly to Dharwad, the release stated.

Meanwhile, the family members of Meghana Singanath and Rekha Kokkatanoor have met the Vice-Chancellor seeking financial assistance and employment on compassionate grounds, and they have been told that they plea would be considered on humanitarian grounds, the release stated.

Both Meghana and Rekha were killed in the accident on January 31 at Mastikatta in Uttara Kannada district. Members of Hindutva outfits subsequently expressed doubt about a foul play and demanded a CID inquiry as both women had reportedly told their families that they were going on official work. 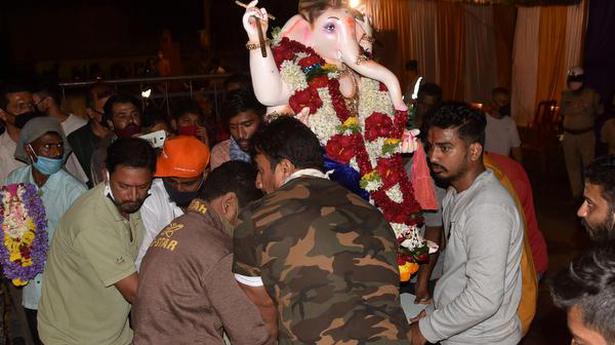 Simple adieu to Ganesh idols in Hubballi this time