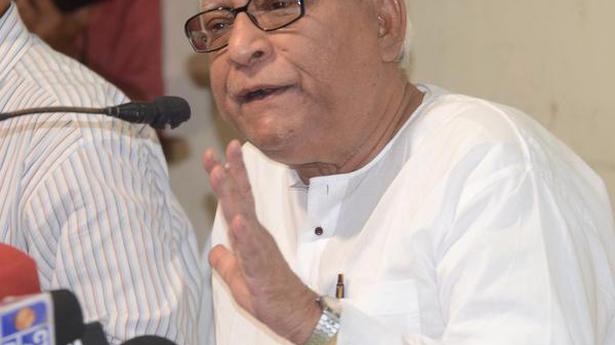 The veteran CPI(M) leader was extubated from mechanical ventilator support on Friday morning.

Mr. Bhattacharjee, who is on non-invasive ventilation, slept well last night, she said.

“Mr. Bhattacharjee is okay. He is still on NIV and taking it well. He is maintaining all critical clinical parameters. Last (Friday) night was uneventful,” said the official said of the south Kolkata hospital where he is being treated.

The veteran CPI(M) leader was extubated from mechanical ventilator support on Friday morning.

“He is conscious and alert at present. His blood pressure, pulse and oxygen saturation are stable. His urine output is satisfactory. He is on IV fluids, IV antibiotics, IV steroids, and other supportive medications are on,” the official said.

On Friday, Mr. Bhattacharjee, 76, met his wife and daughter and communicated with them satisfactorily.

The former CM was put on mechanical ventilator support at the critical care unit of the private hospital where he was admitted on Wednesday afternoon as his breathing-related problems aggravated.

Mr. Bhattacharjee, the Chief Minister of West Bengal from 2000 to 2011, has been suffering from COPD (chronic obstructive pulmonary disease) and other old age-related ailments for some time.

He has been away from public life for the past few years due to his health.