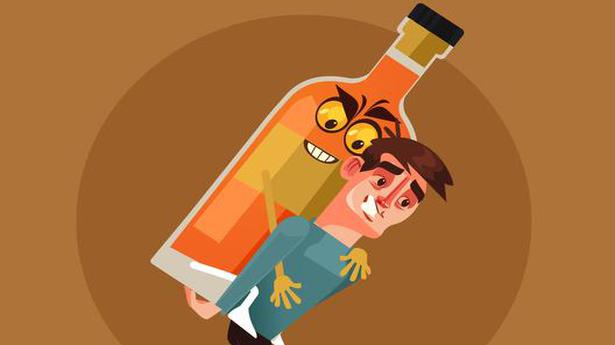 
It is common knowledge that excessive alcohol consumption is bad for health. But the assumption that all the damage can be set right after a person stops drinking is not true, according to researchers from NIMHANS.

Excessive alcohol consumption can cause irreversible changes to the DNA and changes may persist even when alcohol is no longer consumed, revealed a study by researchers at NIMHANS including Pratima Murthy, HoD, Psychiatry, and Sanjeev Jain, Senior Professor of Psychiatry, who heads the Molecular Genetics Laboratory. The study, published online in the ‘American Journal of Medical Genetics’, is part of the PhD work of Soundarya Soundararajan under the guidance of Dr. Murthy.

People who attended the Centre for Addiction Medicine outpatient clinic at NIMHANS from March 2015 to April 2016 seeking treatment for alcohol problems were screened for inclusion in the study, Dr. Murthy told The Hindu on Friday.

Dr. Murthy, consultant, Centre for Addiction Medicine, said, “Although we inherit genes from our parents, their expression is regulated in a unique manner in each person, and may be influenced by lifestyle. Exposure to alcohol affects the pattern of gene expression, and may explain some systemic complications.”

“Alcohol (ethanol) is rapidly metabolised in the body, and its two carbon atoms (CH3CH2 or ethyl) are converted into single atoms (CH3 or methyl), that can react with many other chemicals, including DNA. This change (methylation) can modify the expression of many genes, or even have toxic consequences. We find that the chemical changes in the DNA associated with excessive alcohol consumption may not reverse,” she explained.

Researchers analysed the chemistry of the DNA of individuals who had been drinking heavily for 10 years, on an average of 10 drinks/day. “We assessed their DNA when they first sought treatment and after three months when they reduced or stopped drinking. When we studied the pattern of methylation of simple DNA sequences scattered all over the genome, we observed a significant reduction in methylation in heavy drinkers. This persisted even after three months of abstinence,” she said. Two genes that are directly linked to metabolism of alcohol, however, were more methylated in those with alcohol dependence, and continued to remain so even after abstinence. “We concluded that in heavy drinkers, even when they stopped drinking, the methylation did not come back to the levels of non-drinkers, implying that chemical changes in the DNA associated with alcohol are not temporary,” she said.

“The effects of alcohol were more pronounced in those who had started drinking at an early age. This suggests that starting to drink early may physically alter many genes, including those of the brain. This may have a significant effect on brain development and maturation, that may persist to later adult life. The study highlights the processes involved both in addictive behaviour and cancers,” she added.

10 booked on the charge of auctioning GP seats