The elections to gram panchayats should be a harbinger of clean, honest and responsible politics, said TDP national president N. Chandrababu Naidu on Saturday.

Addressing the elected representatives of the party, in charge leaders and other seniors through a video conference, Mr. Naidu said this election should put an end to the ‘mindless’ rule of the YSR Congress Party in the State. He urged the party leaders to ‘expose’ the misrule of the YSRCP and propagate in every village the good work done by the TDP.

He appreciated the partymen for bravely facing the ‘threats and atrocities’ unleashed by the ruling party and asked them to ensure filing of 100% nominations in the third phase of the elections.

He said the party leaders should remain alert at the time of scrutiny and withdrawal as attempts were being made to reject nominations citing factors that were not there in the Panchayat Raj Act.

He said ‘irregularities’ by the ruling party leaders and instances of threats, distribution of money or liquor by should be recorded and immediately sent to the Election Commission, the respective district officials and the TDP control room.

Advising them to make use of the social media platforms for campaigning, Mr. Naidu said people should be explained how the YSRCP, instead of developing the State, had stalled the works initiated by the TDP, he said.

If the TDP candidate was voted to power, development works worth more than ₹5 crore would be taken up in the next five years. But if the YSRCP candidate won, the funds would be pocketed by the ruling party leaders, he alleged.

There was a strong opposition to the YSRCP among people. The public was able to see through the ‘rampant corruption at various levels’, he said and cited examples of ‘sand mafia, increasing the price of cement to benefit personal cement business at the cost of the livelihood of lakhs of construction workers and loot of the public money’.

He alleged that the ruling party had not spared anything, natural resources, public money or social wealth. “Yesterday if it was about Krishnapatnam port and Kakinada SEZ, today it is about the Visakhapatnam steel plant,” Mr. Naidu said. 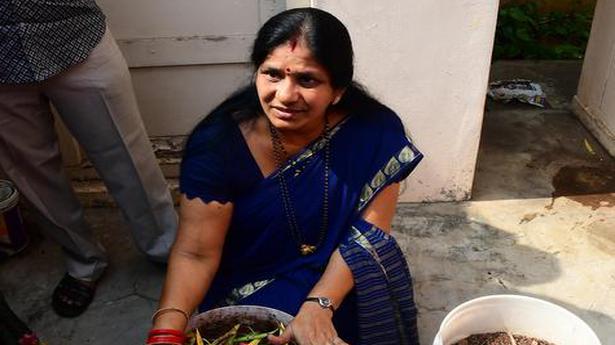 Over 60,000 women from Visakhapatnam process waste by adopting home composting

Girl washed away in Neeva dies