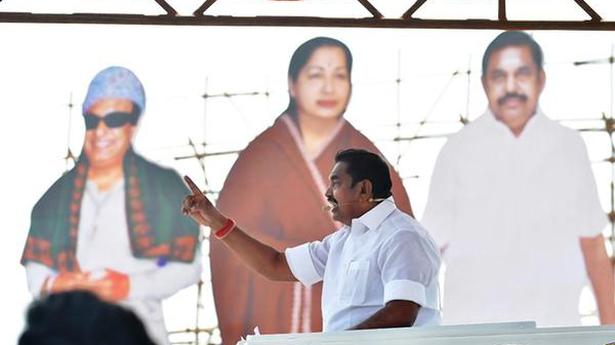 
Chief Minister Edappadi K. Palaniswami said farm loan waiver certificates would be distributed to farmers in a fortnight. He added that 1100, the Chief Minister’s integrated public grievance helpline, under the helpline management system, would be started in a week.

He was speaking after kicking off the campaign in Ranipet district on Tuesday morning. The Chief Minister addressed people in the Arakkonam, Sholingur, Ranipet, Anaicut, K.V. Kuppam and Vellore Assembly constituencies.

“The loan waiver will benefit more than 16 lakh farmers. So we are fulfilling all the promises that we made,” he said.

Throughout his campaign in Ranipet, he outlined the government’s achievements and took a dig at DMK president M.K. Stalin. Mr. Palaniswami said the DMK president was going around districts and collecting petitions in a box. “He says all grievances will be attended to soon after he becomes Chief Minister. But when is that going to happen and when will he solve the people’s problems? Through our 1100 helpline, people can just send in their grievances through their mobile phones. There is no need to break any box,” he said.

The Chief Minister said since Mr. Stalin did not attend Assembly sessions or know about government schemes, he was spreading false propaganda that the AIADMK government had not done anything for the people. “He does not know that under the Chief Minister Special Grievance Redressal Scheme, the AIADMK government has collected over 9.77 lakh grievance petitions, and of this, over 5 lakh have been attended to,” he said.

The Chief Minister said that apart from this, revenue officials were going to every village and giving receipts after taking petitions. “Mr. Stalin is also giving receipts, but they are not valid. Mr. Stalin has started meeting people only now, despite being in politics and occupying important positions over the past several years. But we have been meeting people regularly, even during the pandemic,” he added.

He said Mr. Stalin was reluctant to have a face-to-face meeting to discuss the achievements of the AIADMK and DMK-led governments. “He does not agree, as his party has not done anything for the people. Mr. Stalin says that we have been spending crores of rupees on media advertisements. We are just announcing our achievements, as Opposition leaders do not know about it. This will put an end to their false propaganda,” he added.

He said it was during the AIADMK government that Vellore district was trifurcated. “It was a demand of Vellore residents,” he said.

He later proceeded to Sholingur and highlighted the importance of the kudimaramathu scheme.

“Ranipet mainly comprises agricultural families. Most of their children are studying in government schools and to help medical aspirants in these schools, we introduced the 7.5% reservation, and due to this, 435 such students are all set to be doctors. They are complaining about NEET exams, but it was introduced by the DMK and the Congress. If there is a Nobel Prize for lying, it should go to Mr. Stalin,” he said.

Speaking at Kandhaneri in Anaicut constituency, he said the people were the true Chief Ministers. “Mr. Stalin became DMK president as his father was a party leader. But I came up the ladder and know the pain involved,” he added. The Chief Minister added that there was no safety for women under the DMK regime. “Under AIADMK, the State became a safer place for women,” he added. Ending the campaign on Tuesday at Anna Kalai Arangam in Vellore, he said 2,000 mini clinics would be opened across the State by the month-end. “To reduce traffic congestion in Vellore, flyovers and an outer-ring road will come up. But the DMK tried to stop the implementation of many people-friendly schemes introduced by us,” he said.

He described the DMK as a company and not a party. “It is family politics. People don’t know much about Duraimurugan, the DMK general secretary, who has been in the party for years, but know about Udhayanidhi Stalin. If DMK comes to power, prime property in Vellore will be grabbed by it,” he said.

The Chief Minister will be campaigning in Ambur, Vaniyambadi and Tirupathur on Wednesday.