The XV Finance Commission has expressed concern over the farm loan waivers announced by States like Telangana, that had an impact on their finances.

“An increasingly important factor, and a worrying one, that has begun to impact the finances of States are the farm loan waivers that have been announced by various States since 2014,” the XV Commission said in its report.

Farm loan waivers are often justified on the grounds of falling prices of agricultural commodities and recurring droughts.

However, the policy of giving period farm loan waivers and subsidies carries the risk of building a wider deleterious impact on the credit culture of States by incentivising wilful default and demoralising the conscientious borrowers who regularly service their loans, besides increasing the reluctance of banks in lending to farmers.

The Commission said, according to information, 13 States gave no farm loan waivers while seven States including Telangana and Tamil Nadu gave details of waivers aggregating about ₹ 79,000 crore from 2014-15 to 2019-20.

However, this data could not be relied on to gauge the actual quantum of farm loan waivers for a number of reasons. Firstly, some of the States did not respond. Second, the data was self-reported and could not be independently verified.

The treatment of interest subvention varied across the States.

“Finally, there was very little congruence between the budgeted amounts and actual spends,” the Commission said in its report.

The Commission, which reported its observations on States’ finances, however, appeared positive about the State’s fiscal management. It said in the case of 17 general States, except Telangana, ten showed an increase/worsening of the revenue deficit.

Fiscal deficit too increased in 11 of these 17 general States, except in Telangana.

Increase in the revenue deficit could be due to decrease in own revenue, decrease in Union transfers and/or increase in revenue expenditure, it said. 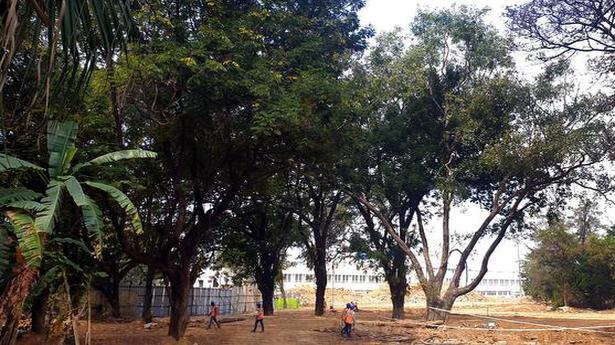 Giant trees inside Hyderabad Secretariat getting ready for translocation