Worried over the uncertainty in the availability of Krishna water as a consequence to the new projects being taken up by the upper riparian States of Maharashtra, Karnataka and Telangana, the farmers coming under the Krishna Western Delta and the Nagarjunasagar Right Bank Canal (NRBC) have urged the Andhra Pradesh government to augment water supply by transferring water from the Godavari to the Krishna basin.

“In the present situation, there is little scope of the farmers in the Andhra Pradesh, especially those in the tail-end areas, realising their quota of the Krishna water because of the projects planned in the upper reaches to draw water when the level at Srisailam is 800 ft,” says All-India Kisan Sangharsh Coordination Committee Prakasam district convener Ch. Ranga Rao.

To offset the shortfall, the State government should transfer at least 200 tmcft from the Godavari, which receives floods for up to six months, through the Pattiseema Lift Irrigation project. This should continue till the Polavaram project was completed, Mr. Ranga Rao told The Hindu.

Under the NRBC, the farmers were entitled to 56 tmcft of Krishna water to cultivate various crops in 4.50 lakh acres. But they could not realise their quota of water during several years in the past. Hence, at least 10 tmcft of water should be earmarked through the inter-basin transfer from the Godavari, from which over 3,000 tmcft of water went into the sea year after year, said All-India Kisan Sabha national vice-president Ravula Venkaiah.

Andhra Pradesh Rythu Sangham district secretary Vadde Hanuma Reddy lamented that though the Bachawat Tribunal had recognised the Veligonda project as an ongoing irrigation project, the same had not been included when the recent gazette notification was issued by the Centre.

The State government should impress upon the Centre to protect the riparian interests of the parched parts in the districts of Prakasam, Nellore and Kadapa, he said.

Meanwhile, Prakasam District Collector Pravin Kumar reviewed the progress of the multi-crore irrigation project, which was expected to wet lands under the first phase later during this year, and directed the officials concerned to speed up implementation of the rehabilitation package for those expected to be displaced by the project. 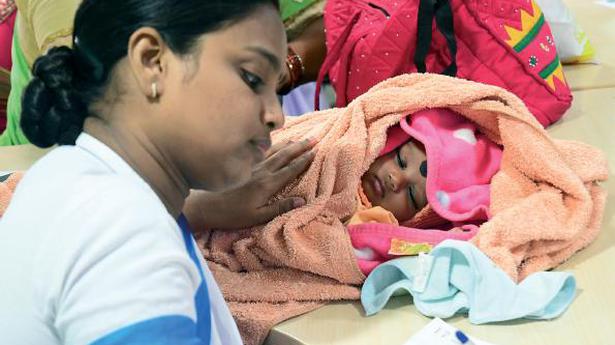 ‘Giving with one hand, taking away with the other’