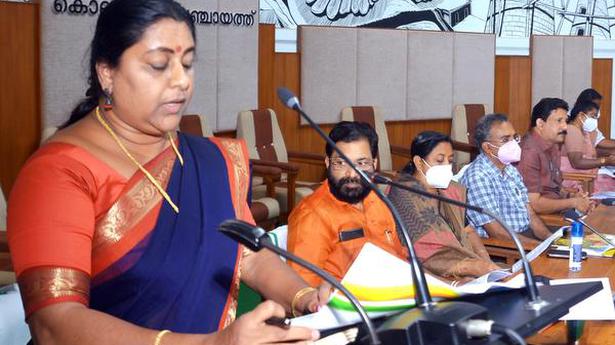 
The Kollam district panchayat budget 2021-22 has a string of projects to protect the environment and empower women, with agriculture continuing to receive the maximum impetus. The budget showing a revenue of ₹158.36 crore, expenditure of ₹151.75 crore, and surplus of ₹6.61 crore was presented by vice president V. Sumalal here on Wednesday.

Poliyopoli, a project to promote paddy farming, gets ₹1.6 crore, including an outlay of ₹1 crore for farm equipment. Randidangazhi, a school-based farming initiative that brings together students, NSS volunteers, clubs and teachers gets ₹50 lakh. Another ₹50 lakh will be spent on distributing quality fruit tree saplings to school students on Chingam 1 as part of Chingapulari project.

The Kuriyottumala high-tech dairy farm gets ₹5 crore. The projects there include fodder grass cultivation and a hatchery unit to produce 1 lakh chicks a month. The district panchayat also has plans to launch a range of value-added products including jam, squash, syrup, ice-cream, cheese, coconut oil and tender coconut products from its farms at Kuriyottumala, Kottukkal, Thottathara, and Karunagapally.

The products will be branded before marketing and ₹50 lakh has been earmarked for that. Another project to promote integrated farming gets ₹50 lakh and an equal amount has been allocated for the production of high-yielding variety seeds and saplings at Kottarakara and Kadakkal farms.

While ₹1 crore goes into promotion traditional industries including cashew and coir, the same amount has been set aside for Phoenix, a new project to support IT-based enterprises by providing nano stations at the industrial parks at Kareepra and Pathanapuram. Swayamprabha, a project offering 75% subsidy for women groups to start production units in food processing, garment making, and handicraft manufacturing or start beauty parlours or fitness centres gets ₹60 lakh. To study climate change and take preventive measures against natural calamities, ₹50 lakh has been allocated.

While ₹4 crore will be invested on waste processing, Miyawaki forests will be cultivated in public places spending ₹25 lakh. Thelineer, a project to clean the major rivers in the district for unrestricted water flow, gets ₹75 lakh. The Ithikkara river will be cleaned in the first phase of the project to be followed by Kallada river and Pallikkal river. Another ₹75 lakh has been earmarked for the protection of Sasthamcotta Lake while allocations were also made for the welfare of sexual minorities and persons belonging to the Scheduled Castes and Scheduled Tribes.

The beginnings of the snowmobile