After the success of Takeoff, Mahesh Narayanan is back with C U Soon, it will premiered on Amazon prime

These are trying times and adversity inspires creativity in some. ‘Malik’, a big budget Malayalam film starring the redoubtable Fahadh Fasil and directed by Mahesh Narayanan after ‘Takeoff’ was much anticipated and being readied to hit the theaters when the pandemic struck and lockdown was announced. Instead of wallowing in self-pity the duo decided to take necessary precautions and bring alive an idea Mahesh had put on the backburner. It suited the situation, did not call for a large cast or crew and depended mostly on Mahesh’s writing acumen and razor sharp editing. The characters interact virtually, mostly on mobile phones or computer screens. Netizens who’ve watched the trailer have opined it reminds them of the 2018 film, ‘Searching’, at least the ‘screen based’ format wise. We’ll wait for September 1, when ‘CU Soon’ premieres on Amazon Prime.

A chat with the director Mahesh Narayanan:

Its three years since the release of ‘Takeoff’. You’re not prolific like most Malayalam directors. Was the success of ‘Takeoff’ intimidating?

Not really. After ‘Takeoff’ I was working on something but it didn’t materialize. It was again based on a true incident. There were various issues like getting the right cast. I went into a depression and had to be hospitalised. It’s Fahadh who asked me to think of something. That’s how ‘Malik’ happened. It was a subject we discussed much before ‘Takeoff’ in 2011 but it went on the floors only in 2019. I worked a lot on the script till all of us were satisfied because it was a big budget venture. It was in the final mixing stage when the lockdown got announced. It was supposed to hit the theatres in April. OTT platforms did approach us but it’s a film made for the big screen. We didn’t know what to do during lockdown. There was an idea and a video about a girl I’d shared with Fahadh. I bounce every idea with him. At that time Fahadh was not supposed to act in it because the plot was driven by a female character. During lockdown he reminded me about the idea because it was screen based. So I thought when every other industry is working from home why not the film industry?

Was the producer of ‘Malik’ not tempted to go the OTT route?

Well, every producer is in the same situation but that film is not made for the digital platform. I’m not talking in terms of content. It’s the money involved too. By Malayalam standards ‘Malik’ is big budget. It cost around 20 crores. What Netflix paid for ‘Gunjan Saxena’ will be much more than what they offer for a Malayalam film. ‘Gunjan Saxena’ is not big budget, but what Netflix offered is not in proportion to what is offered to regional content.

Language is no longer a barrier thanks to dubbing and subtitling. Do you see a regional bias?

It’s definitely there. When I look at the statistics sent by these providers it says Malayalam cinema is niche. I don’t agree. Then again we don’t have a choice. Anyway I’m a filmmaker whose first choice is theatrical release. I want to get the pulse from the first day audiences. I’m just hoping this is a stop gap arrangement. I would like to quote Kamal sir. He wrote and shot a song during lockdown and I edited it. During the process he said 2020 is a year where you should just try to survive, we should make content irrespective of the platform. That’s the inspiration behind this venture.

Is ‘CU Soon’ too based on a real life incident?

Yes, this is based on something that happened to a friend’s wife. It’s a story that Keralites can relate to because it’s happening on a daily basis. I would have made this film in this format even without lockdown. I was not forced by circumstances. It’s not a lockdown film and Fahad agreed.

Is there a chance after the lockdown that people can watch this on the big screen?

I guess producer Fahad will be able to answer that but even when initial talks with Amazon were on we were only planning a theatrical release. We were hoping the Covid curve will be flattened in Kerala at least. There was a possibility of theatres opening with limited occupancy. We were fine with that for this film unlike for ‘Malik’ which needs a full house. I would have been happy with thirty five percent occupancy for ‘CU Soon’.

So has it now come down to content is king and technique is just a tool?

I’m not for technical gimmickry or wizardry. This film is a screen-based film. All the characters communicate through virtual devices. I should tell you we have a version for theatres which could happen later. I think circumstances are such that people are thinking about smaller budgets. Shooting for long periods is risky too. Again I’m hoping this is temporary.

So what were the constraints and the compromises you had to make? You’ve shot with an IPhone when you could have used any camera.

I needed a camera that was user friendly. My actors were shooting the film. I’m not promoting an Apple product but the quality is excellent. It’s not shot entirely with an IPhone as is being bandied about. It was shot on various formats. There was a 4K resolution camera running, there were dashboard cameras and lot of other stuff.

Was it difficult for the actors who had to react to cues and talk to blank screens?

Actually my job as a writer was the toughest. It was a thin line that was developed into a forty page screenplay. The final draft was 65 pages. As a writer, in this format I can only narrate the situation. I cannot turn on the camera. It was very tricky. A lot of back stories will have to be filled in by the audiences like this is what happened and now this person is in this room chatting with this person. Every time it’s a two camera setup. There was no conventional suggestion or close-up shots. First it has to be made on the editing table, re-composed, reframed and the cinematography was quite tricky. That’s where virtual cinematography changes come in. I assembled all the actors in a particular building in different apartments and then we bounced ideas. Test shoots were done. So when an actor was performing the other would be there to converse even though they were not in the same frame. It helped enhance emotions.

So what would you call this format?

Can an editor who is also the director look at his film dispassionately?

The moment I finish shooting I’m dispassionate. I’m my first critic and cut ruthlessly. My problem is that I shoot for my edit. So my edit timeline is already locked and is my framework is set. Whenever my actors suggest trying something I tell them I need it in a certain way because I will only use it in this portion.

You’ve not really compromised in the sense you’ve used Kunal Rajan to do the sound mixing. You’re not saying, ‘someone may watch this on a mobile so this is enough’.

Our aim was also to pay people their price at a time when everyone was trying hard to survive. I made the guy who recorded sound on location for ‘Malik’ in charge of sync sound for ‘CU Soon’. He got a promotion. My edit assistants and directorial assistants and the art department were all paid and Fahadh ensured that. This film has helped at least fifty people earn with dignity in their own field during these trying times. 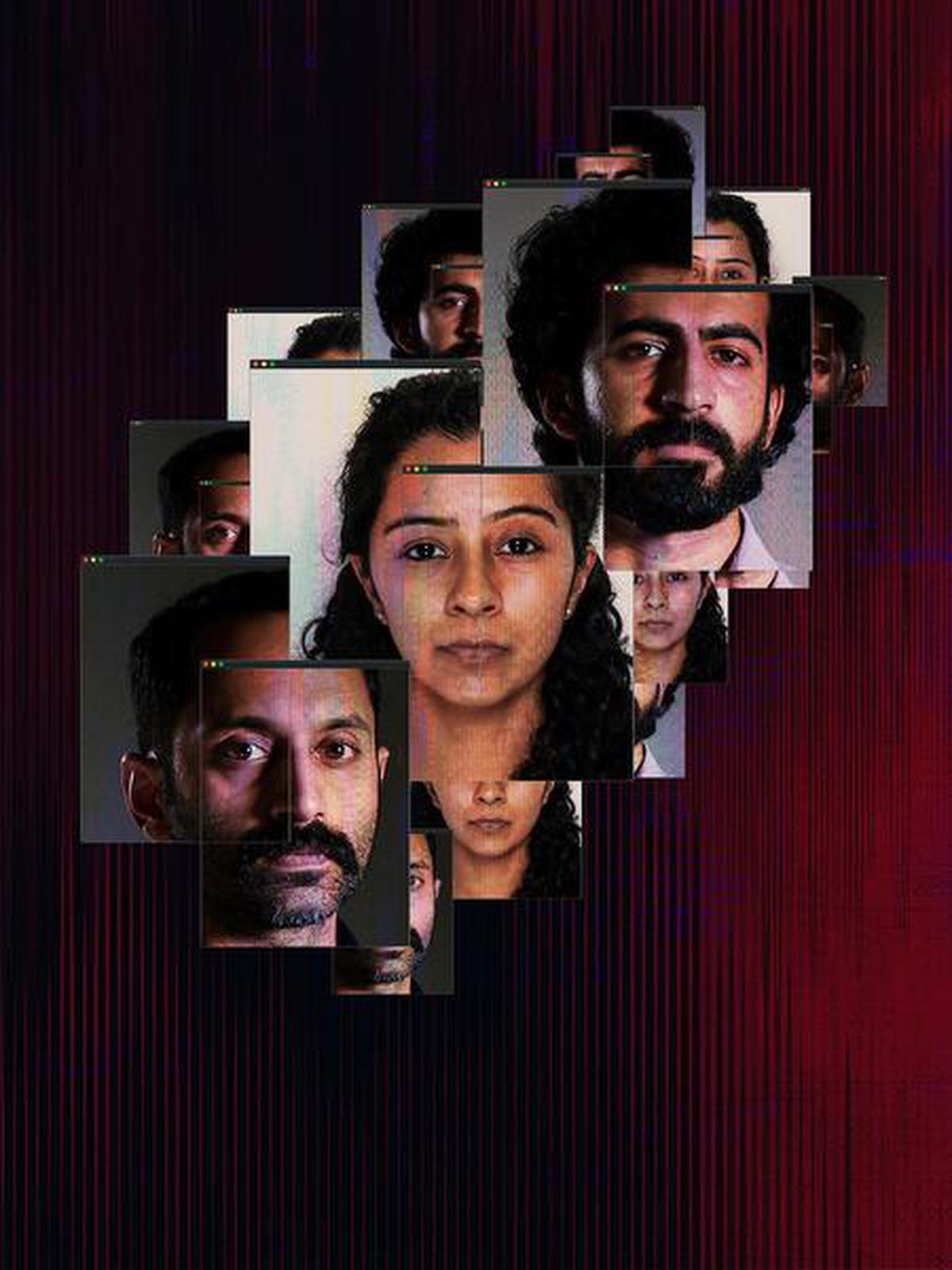 Scenes from the film

When COVID set in and theatres closed producers rushed with their finished products to the OTT platforms. ‘CU Soon’ seems to be the first film shot during the Pandemic and being premiered on Amazon Prime. Was it a pre-approved project?

Was it finished in a hurry? Were you worried theatres would open and since you’d already offered it to Amazon the purpose would be lost?

We were aware the situation was dire. I’m a person who’s eager for theatres to open and again see full houses. For that we have to assure people they will be safe. Fahadh was telling me that Mohanlal told him fans will flock the theatres but we have to be responsible for them. Times are still very uncertain.

Now even though it’s for OTT you do need names like Fahadh and Roshan to lure viewers.

That’s true. It’s a new format and if there are unknown faces people will skip it.

For a thriller one gets the feeling that a tad too much was revealed.

That was on purpose. I have a lot more to say than the trailer (Laughs).

I know the relationship you share and the respect you have for Kamal Haasan. By asking him to release the trailer were you also acknowledging the fact that he was the first to suggest that DTH was the way ahead?

During ‘Viswaroopam’ he would tell me to try this but it seemed like a strange suggestion then. I could understand his state of mind though. It’s not just DTH but using the Red camera for ‘Mumbai Express’ or using Avid for ‘Mahanadhi’.I wanted him to release the trailer. He is the pioneer to most technological advancements that have happened In Indian cinema.

A little out of context, but you seem to have had fallout with your friend and favourite actress Parvathi.

It’s not a fallout just a difference of opinion that’s all. She made a statement about Islamophobia. I have my own interpretation. Friends will have differences of opinion. There will always be mutual respect.