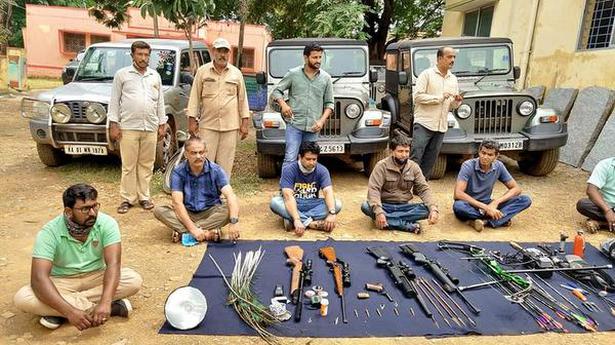 
The Chitradurga forest officials have arrested five people, including a minor, who were set to hunt wild animals armed with sophisticated weapons in Gowdanahalli Reserve Forest in Hiriyur taluk.

The officers, working on a tip-off, took into custody Ikshu Dhanva, 50, of Shivamogga, Pratap, 42, Vinod, 38, Vasudeva Shetty, 42 of Bengaluru, and a minor, on October 11. Ikshu Dhanva is a son of the late Prafulla Chandra, noted progressive farmer of Shivamogga. The minor has been sent to juvenile custody. Others are in judicial custody. Two more people are absconding.

The officers were stunned when they got to know that the team had telescopic guns, a pistol, archery set, fishing kit, and knives among others. The weapons and three vehicles belonging to the arrested were also seized.

K. Chandrashekhar Nayak, Deputy Conservator of Forests of Chitradurga, told The Hindu: “It seems they were all prepared to go on a hunting expedition when our team reached the spot. They all had highly sophisticated imported weapons. We have registered a case under the Wildlife Protection Act.”

The officers suspect that the team must have visited the place in the past to hunt wild boars. It is said they had hired a farmhouse near the forest area to stay during their visit to the place. One among the absconding is a resident of Hiriyur taluk, who provided them with shelter.

“The arrested are right now in judicial custody. We will seek their custody so that we can collect further information from them. Our team did not find animal carcass from them. It seems they visited the place earlier for hunting expeditions,” the DCF said. The officer said the case about possession of arms would be handed over to the police. HC to examine implications of increasing wards on civic polls

NEW DELHI: An international team of researchers has found a“lost” river that ran through the central Thar desert, near Bikaner,