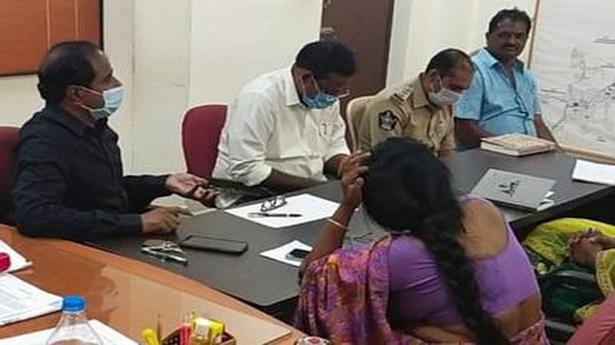 ‘People in places bordering T.N. should be extra careful’

As the rise of COVID cases in the district is causing alarm, the COVID-19 Task Force officials have mooted flash inspection of the cinema halls, shopping malls, private and government hospitals in order to check the growing incidence of people becoming lax towards guidelines imperative to quell the spike.

Following a sharp increase in the cases in Chittoor district, that touched 90 on Friday, the task force officials had convened a meeting at the Tehsildar office at Puttur and was attended by revenue, police, medical and health, and education department staff.

Special Officer (Task Force) P. Ravi Raju and Deputy SP (Puttur) T.D. Yashwant said that despite the repeated appeals to the public to wear masks in public places, many continue to ignore the same, putting others at risk.

The officials warned that a laid-back attitude towards the guidelines would only make matters worse for the district which leads the State’s chart with highest daily tally. They said people in the eastern mandals of Satyavedu, Nagalapuram, Pitchatur, Puttur, Nagari and Nindra, which border with Tamil Nadu, should be extra careful while stepping out.

The task force officers appealed to the managements of cinema halls and other commercial outlets to strictly discourage public entering their premises without facemasks. It was observed that some patients were visiting both the government and private hospitals without masks.

Helping hands in the hour of need