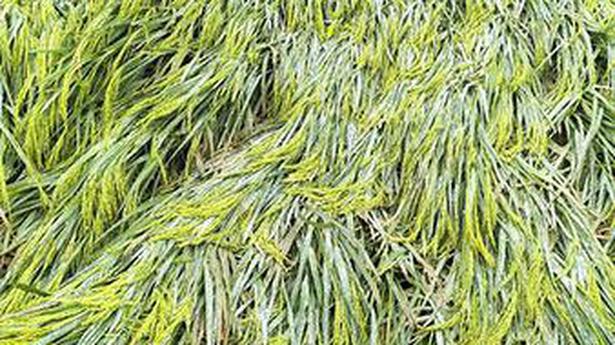 
Although there was some respite from rain on Thursday, the flood situation in the villages on the banks of the Bhima and the Krishna in Yadgir and Raichur districts continued to pose a threat.

Standing crops such as paddy, cotton and red gram on several thousands of acres of land were inundated in floodwaters.

The backwaters of the Bhima entered paddy fields in Yadgir and Wadagera taluks in Yadgir districts and Ganjall and Korthakunda villages in Raichur district. Several hundreds of electricity pumpsets were washed away in fast flowing river waters. Road connectivity between Kalaburagi and Yadgir via Wadi, Nalwar was cut off after a bridge near Malagatti was submerged in the Kagina river.

As many as 74 houses have partially collapsed and 1,300 hectares of agriculture land with standing crops are under rainwater in Yadgir district. Thousands of electricity poles are surrounded by river waters. However, there is no report on the death of animals and sheep and damage to electricity cables and transformers.

Deputy Commissioner of Yadgir R. Ragapriya visited the Gursunagi bridge-cum-barrage across the Bhima river near Yadgir and inspected the situation as the river has been flowing with high quantum of water since yesterday after officials discharged more than a lakh cusecs of water from the Sannati Bridge-cum- Barrage.

And, 3.20 lakh cusecs of water was discharged from the Sannati bridge into the Bhima river course when 3.20 lakh cusecs was the inflow. Ms Ragapriya has appealed to the general public not to venture into the rivers for any reason.

Heritage bridge across Kapila to be conserved