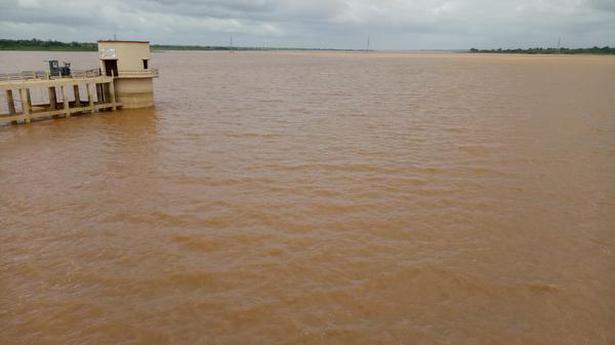 
Even as a 24-year-old man died by drowning in Belagavi district on Sunday, the threat of a flood subsided in most places in North Karnataka because of low rainfall and reduced water release from Maharashtra.

However, as a matter of precaution, officials have shifted around 150 persons from low-lying villages into a relief centre at Nippani.

Water release into the Krishna and its tributaries has reduced to 1.6 lakh cusecs. The inflow and outflow at Almatti dam were stable at 1.8 lakh cusecs, officials said. Inflow into the Lal Bahadur Shastri reservoir at Almatti — the biggest dam across the Krishna river in Karnataka — has greatly reduced. The inflow and outflow were stable around 1.6 lakh cusecs. The dam, with the gross capacity of 123 tmcft, has around 92.4 tmcft of water now.

At Narayanpur, the inflow was at the rate of around 1.9 lakh cusecs, while the outflow was 1.8 lakh cusecs. The dam had 27.29 tmcft of water.

Thanks to the let-up in rains for two days in Belagavi and Khanapur, the water levels in the rivers Hiranyakeshi and Markandeya and in the Ballari Nala stream were decreasing.

Irrigation officials in Belagavi said the water levels in the reservoirs in Maharashtra were low and there was no chance of release of large amounts of water immediately. Koyna dam is 70% full while Warna dam is around 85% full. Water release from those dams will increase if the water levels reach 90%, an officer said.

The young man who died by drowning in the Ballari Nala was identified as Nagaraj Hebballi, 19. He had been washed away in the stream on Saturday night. State Disaster Response Force personnel fished out his body about 2 km from his village.

This is the second death in North Karnataka in the flooding of waterbodies. A young girl was washed away in Hubballi two days ago.

Hebballi had gone to his field to retrieve his irrigation pump set that he had connected to the stream on Saturday night. When he did not return, his relatives told the police, who alerted the SDRF force in Gokak. They arrived on the spot and started searching for him using boats. The body has been handed over to his relatives.