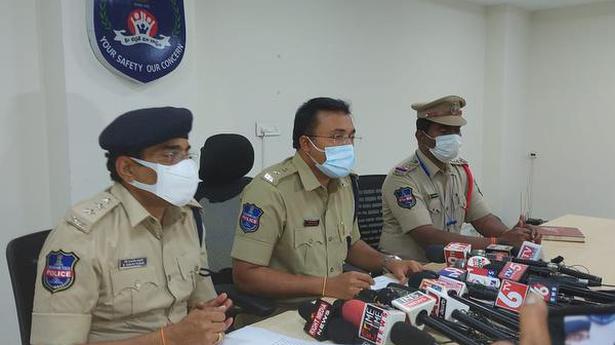 The body of a 68-year-old French national, who went missing two days ago, was found in the bushes near Himayat Sagar reservoir in Hyderabad on Saturday morning.

The victim, Marie Christene De Rochemonteix, a resident of Dargah Khalij Khan in Gandipet mandal of Rangareddy district, was the founder and chairman of Marica Group of Schools, which has branches in Toli Chowki and Dargha Khalij Khan Village.

Deputy Commissioner of Police (Shamshabad zone) N. Prakash Reddy said Marie was murdered by her adopted daughter Roma (24), her live-in partner Vikram Sriramula (25) from Kondapur and his friend Rahul Gowtham alias Sai (24) from Jagadgirigutta. “They conspired and killed Ms.Marie for her property,” he said.

While Vikram is a native of Tadipathri in Anantapur, Rahul hails from Nellore.

The victim along with her family members and fellow French nationals migrated to India and had been living in the city for over 30 years. She had two biological daughters — Marie Solange who is married to one Prashanth and stays at Suncity and Rebecca, who resides in Puducherry. She adopted two girls — Roma and Priyanka — soon after they were born.

Recently, Marie decided to perform Roma’s marriage and created a profile on the Christian Matrimony website. In May, Roma developed acquaintance with Vikram through the matrimony website after which they started to live together in a rented accommodation at Kondapur. Marie refused to perform their marriage after she learnt about their relationship. As a result, the couple conspired along with Rahul to eliminate her and get her property.

As per their plan, on September 8, Roma went to meet Marie at her house and after having a discussion, the victim dropped Roma in her car at Marica High School, Toli Chowki, and headed home. Roma dropped a message to Vikram and Rahul who were waiting outside her house on a bike.

“When the victim reached home, the duo jumped inside the compound wall and waited near the bathroom for an opportunity. They strangulated her to death with a rope and stuffed her body in her car trunk. They then dumped it in the bushes near Himayath Sagar reservoir bushes to destroy evidence,” DCP Reddy said.

Later, they parked the car back at her house, stole her car keys, laptop and phone, before leaving the scene. The next day, they transferred ₹2 lakh to Roma from Marie’s bank account to mislead her sisters and create the impression that she is clueless about their mother’s whereabouts.

Based on the complaint lodged by Solange’s husband Prashanth, a missing case was registered on September 9. The needle of suspicion pointed at Roma. Acting on a tip-off, police apprehended her and on further questioning, she confessed to the murder along with her partner and his friend. Based on their statement, the victim’s body was recovered and shifted to Osmania General Hospital morgue, where toxicology experts conducted the autopsy and suggested that Marie was strangulated to death.

Marica Group of Schools principal Juveria Nazish issued a statement: “With a very heavy heart, we are sharing with you the loss of our beloved founder and chairman of Marica Group of schools, Marie Christene De Rochemonteix. My heartfelt condolences to the entire family. Online classes will be suspended for one week”.