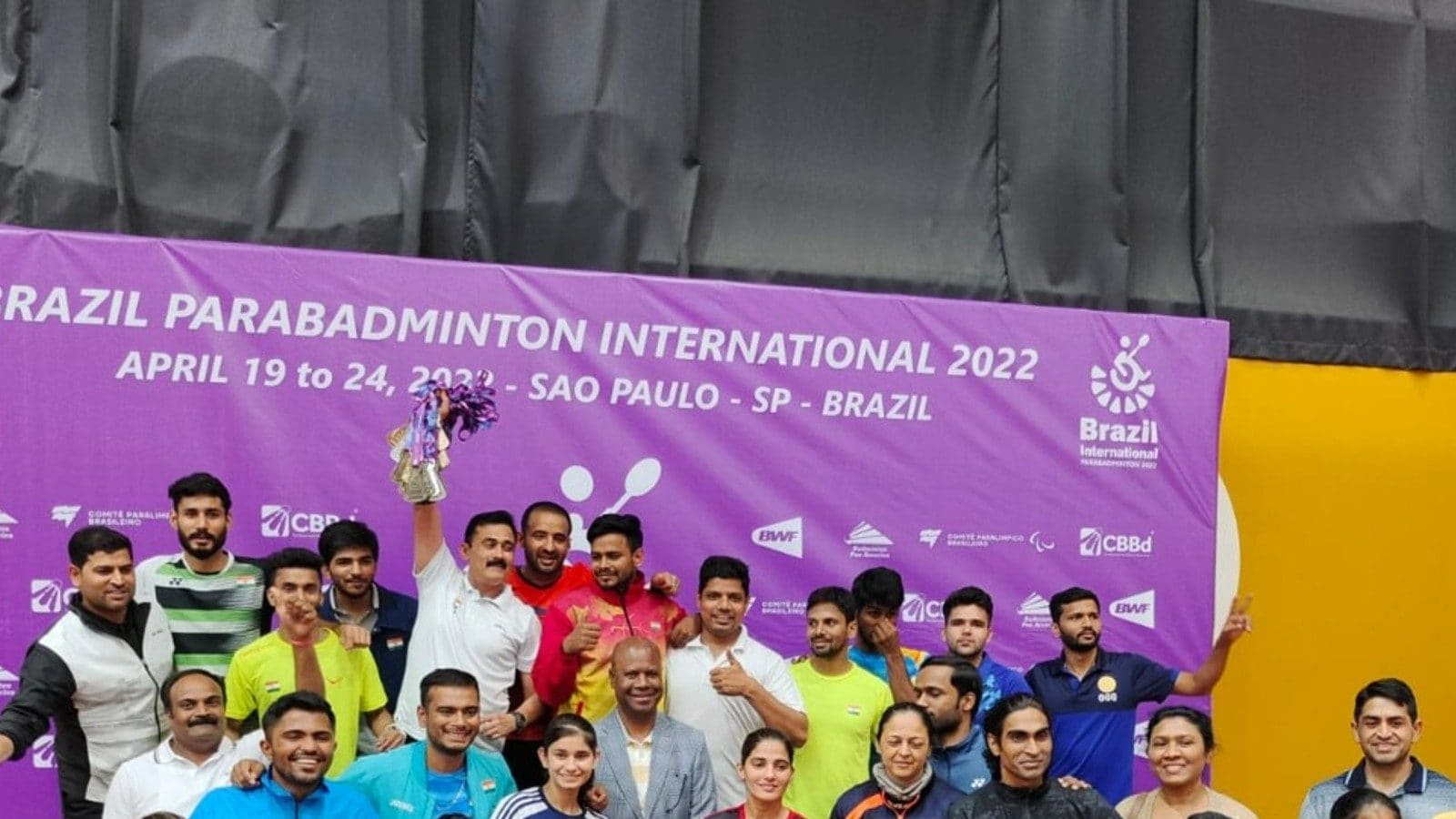 
While most of the country has been engrossed in watching the IPL, there are some debating whether India can finally win the Thomas Cup, and the latest news of Asian games being postponed by a year is consuming the remaining sports fans in the country.

However, the juggernaut of Indian para-badminton continues to bulldoze past other countries, crushing all opposition to smithereens. In the last five years, India’s para-badminton players have won 485 international medals which include 157 gold medals.

And at the helm of this extraordinary success is the one name that is now become famous all over the world of para sports, Gaurav Khanna the chief coach of Indian para Badminton. This Dronacharya awardee deserves at least a Padma Bhushan for his humungous efforts.

As the para squad gets ready to play, BWF second level tournaments in Dubai and Bahrain and level 1 in Canada, Gaurav feels the going is good but lots more is to be done.

The first thing that has become routine is the huge contingents that go for the para tournaments. For example, he expects a group of 40 players for Dubai and Bahrain. And in Canada which is a level one BWF event where you go on world rankings, he feels that at least 25 players will go. But it has to be very expensive. So who pays for it?

Says Gaurav, “Well it is expensive no doubt but there are a lot of sponsors nowadays to help out. Some players are helped by the government and some by the NGOs or private sector sponsors. So apart from the Sports ministry and TOPs scheme, we have OGQ, Go Sports, Well Spun, Reliance Sports and others who now are very helpful. So enough help is out there for my team. And you are right we do travel as a big team.

“For example, we are off to Dubai and Bahrain soon. These are level 2 tournaments and nearest to India; plus players get classification done here so they know which category they will be slotted in to compete in. So I will not be surprised if we are 40-50 strong here. And even for Canada – a level 1 event – we may have up to 35-40 or so. And another reason why our contingents are high is because we have many classifications for each category. For example, in men’s singles, there are many categories like SL3, SL4, SL5, WH1, WH2 and SS6- a total of six classifications. So you add up other events like doubles or women’s singles and you have a battalion strength. That is why our numbers seem big.”

The other aspect that he is clear about is the wheelchair issue. We are good in all other categories, but in wheelchair events, there is something lacking. So what is the problem?

Analyses Gaurav, “The fundamental problem is that our players are not able to buy the top class equipment required which at 13-15 lakhs are very expensive. But these chairs, weighing about, 4-5 kgs are so easy to manoeuvre and twist and turn. Our boys use the chairs weighing 12-14 kgs and are simply no match.

I have asked our parent body PCI to look into this aspect. Maybe the sports ministry can help. Or some company in the transport sector can do a miracle and through R&D come up with a solution. In our case, we may be a better player than the Chinese, Japanese or Koreans but we get beaten by the equipment. We are slower in court because of the heavy chair. The man/machine combination defeats us. Stroke wise, game-wise we are equal, if not better. That’s such a shame. But we have started to show our determination and class even with heavier chairs.”

At Brazil international in Sao Paolo last month we got a singles silver through Prem Kumar and a bronze through Ammu Mohan. And for the first time, we have in Prem Kumar a historic world no.4. So the beginning to start winning has already come on track.

But, we also have to use better technology to make the wheelchair in India. Gaurav is in touch with a Japanese firm to come out with a solution by innovating an athletic wheelchair which is light in weight and light on pockets.

Indian para efforts and constant winning of medals/titles are looked at with envy by the rest of the participating countries. They are also making efforts to challenge this seeming monopoly by India. Is India threatened by any particular country?

“No, says Gaurav, “We don’t have any challengers. Certainly, some countries are getting better, but so are we improving in every aspect of the game. Our training is continuous and demanding. We raise our own bar and then try to reach higher and better it. The only problem we have is the wheelchair events. But there it is not a lack of trying but not having the right machine to propel us forward. When it comes to strokes, court craft, and understanding of the game we are second to none. Every one of my squad wants to win medals for India. We are all hungry to bring more glory to the country.”

So we are happy in our space. With no challenge on the horizon from any other country. But we have to be very cautious, very wary of other countries trying to topple us. We won’t give in so easily.

Para badminton is becoming more and more popular. The players have become really famous and his academy is having a huge number of players taking advantage. And the medals haul in international events are also contributing to the image. What are the reasons? The chief coach is clear in his thinking, saying,” I contribute this surge in popularity to two main factors. First was the fact that India won many medals including the gold at Tokyo Paralympics and these matches were shown on National TV. The country suddenly paused to see and understand for itself that the country did not win many medals in mainstream sports, yet the unknown, unheard of Indian paras won a handful.

The winners became iconic and names like Pramod Bhagat, Krishna Nagar, Manoj Sircar, Palak Kohli, etc become household names. Huge receptions, and felicitations, headed by none other than PM Modi himself, followed all over the country. The medalists were awarded the same cash and accolades as the abled athletes. “

The media went haywire and for months the para champions were on every page, their struggles and achievements chronicled all over. Their heroics reached society in general and youngsters in many disabled categories realised that they could have a career in para-badminton.

There was a huge interest shown all over the country. Many youngsters joined and Khanna is still getting calls from many more to join. “I don’t have place now in my academy. I feel sorry I can’t accommodate more. But I cannot just take in quantity over quality.”

But the fact is that the response to the talent hunt has been overwhelming, just goes to show how popular para-badminton has become over the years. This popularity can also be gauged by the fact that last year’s para national championship had 400 plus entries as compared to just two years before when the organisers struggled to get even 80-90 entries. “It is now becoming an issue of plenty. Of course, the fact that we hit headlines regularly for winning bucket full of medals also helps in making us more and more popular,” says an elated Gaurav.

So what is the future of our para players in 2022/23 and the all-important 2024 Paris Paralympics?

Khanna says, “This year will be all about getting used to the BWF circuit and with various levels of tournaments, the main contenders and opponents whom we will face once the qualifying year for the Paris Paralympics start from April next year.”

The head coach predicts an astonishing ten medals from para-badminton and insists that this is a realistic number. Most astonishing is his assertion that despite the wheelchair issue he is positive that we will get a medal in this category as well.

“I also expect a gold podium finish for Krishna Nagar and Nitya Shree in mixed doubles. My predictions for 10 medals may seem farfetched to all but I speak after seeing how this pair has shaped up against the opposition that I have researched. I have also seen great potential in some of the new players who have joined the group. Like Mandeep Kaur, Manisha, and Nitya Shree. I will not name others but they will shape up by next year. We still have time for Paris.”

So Khanna is very upbeat about the future and is extremely happy with the new talent that had been unearthed. He says proudly that he is already looking forward to the Paralympics of 2028 and 2032. And he has another goal lined up. A thousand medals in the next three years – And why not. He is on a calibrated winning spree. And for India, this is really the best news.