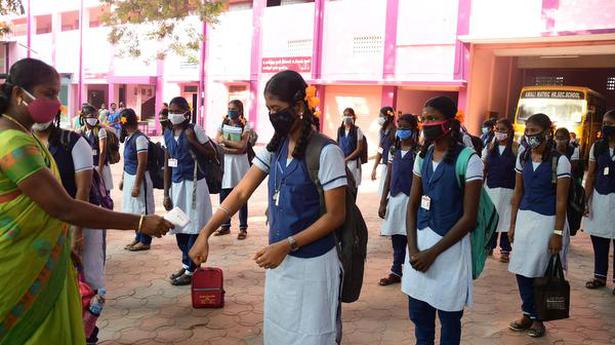 Most of the schools in Madurai district witnessed good turnout of students of Classes 10 and 12 on Tuesday when schools reopened with necessary safety precautions after a gap of over 10 months.

District Chief Educational Officer R. Swaminathan said that around 82,500 students of Classes 10 and 12 are studying in a total of 534 schools in the district. “Most of the schools had over 95% attendance on Tuesday. All schools were asked to strictly follow all COVID-19 safety protocols issued by the government,” he said. Students were allowed to attend classes only with the consent of their parents, he added.

P. Meenakshi, Headmistress of N.S.S.B. Corporation Girls’ Higher Secondary School, said that they had formed separate teams of teachers to monitor the students in classes and outside toilets. “We provided facemasks for students who did not wear face masks to schools,” she said.

Since, most students were anxious about attending board examinations this year, counselling sessions were conducted for the entire day on Tuesday with an aim to provide mental support for the students, said Ms. Meenakshi.

A K. Suresh, Principal of Government Higher Secondary School at Pothumbu, said that conducting online classes for government school students was not possible as many students lack necessary infrastructure to attend the online classes.

Although teachers continuously insist students to maintain adequate distance from each other, many times students do not adhere to the physical distancing norms, he said. “Students were overjoyed to meet their friends after a long time,” he added.

Many of the government school students who travel from distant places commute to schools through public buses, increasing the risk of spread of COVID-19, said Mr. Suresh.