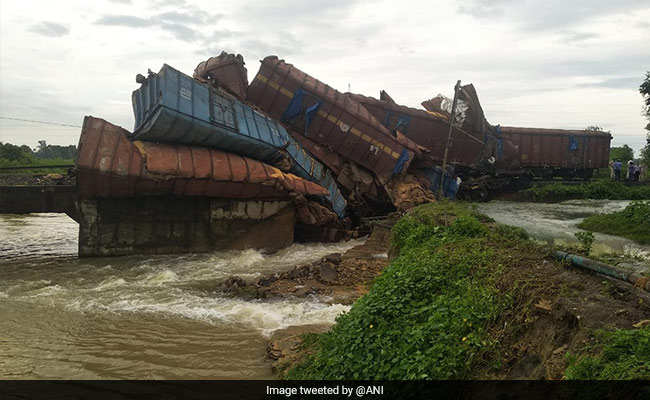 Talcher recorded 394 mm of rainfall in the last two days.

At least nine wagons of a goods train running on the Angul-Talcher Road route of East Coast Railways derailed in the early hours of Tuesday and fell into a river, officials said.

The wagons carrying wheat plunged into the river around 2.30 am, but the loco pilot and other staff were reported to be safe as the engine remained on the track, they said.

Heavy rain in the wake of a deep depression in the Bay of Bengal is likely to have caused the accident on a bridge over river Nandira when the goods train was on its way from Firozpur to Khurda Road, the officials said.

Talcher recorded 394 mm of rainfall in the last two days.

Following the incident, the ECoR has cancelled 12 trains, diverted routes of eight others and short terminated another, they added.

Accident relief trains from Sambalpur and Khurda Road have been rushed to the spot, where senior officials are reviewing the restoration work.

“Prima facie, the cause of the derailment appears to be… flash flood. Retaining walls on both sides have been damaged and washout of tracks on approach to the bridge from the Angul side is also noticed,” an ECoR official said.