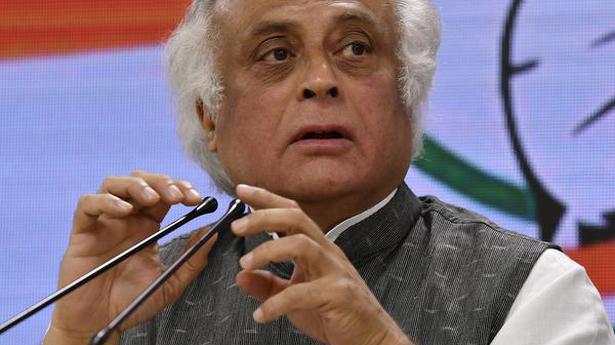 Jairam Ramesh asks why a Parliamentary committee can’t examine farm laws if govt. was willing to suspend them

The Congress on Sunday accused the Bharatiya Janata Party (BJP)-led government of trying to “silence” all those who report the truth on the farmers’ agitation with arrests and sedition charges, while the government was yet to act upon the “perpetrators of violence on January 26”.

Senior party leader Jairam Ramesh also asked why the government could not allow a Parliamentary Standing Committee to “examine” the farm laws if Prime Minister Narendra Modi was willing to suspend their implementation for 18 months.

“Prime Minister says 3 farm laws are on pause for 18 months. This is as usual being too clever by half. Why not give a Parliament Committee the same time to examine them and report back to Parliament?” Mr. Ramesh asked on Twitter.

The principal Opposition party stepped up its attack on the government after a freelance journalist, Mandeep Punia, was arrested at the Singhu Border protest site late on Saturday night for allegedly “misbehaving” with police personnel.

The Congress leader also posted a video of Mr. Punia being held by the police at the border protest site.

Party general secretary Priyanka Gandhi Vadra said journalists covering the farmers’ movement were being arrested, cases were being slapped against them, and the Internet was being shut down in many places. “The BJP government wants to trample upon the voice of the farmers, but they have forgotten that the more you suppress, the more voices will rise against your atrocities,” she said.

Addressing a press conference, party spokesperson Supriya Shrinate said, “It is the 70th day of the protest by farmers and they have been forced to sit at the borders by an insensitive, obstinate and stubborn government that itself dug trenches and refused the farmers any entry in Delhi. For anybody who tries to show their plight, their pain, this government will go after them — whether it is people in social life, in political life or journalists.” TNUEF to unveil election manifesto for Dalits on Feb. 11