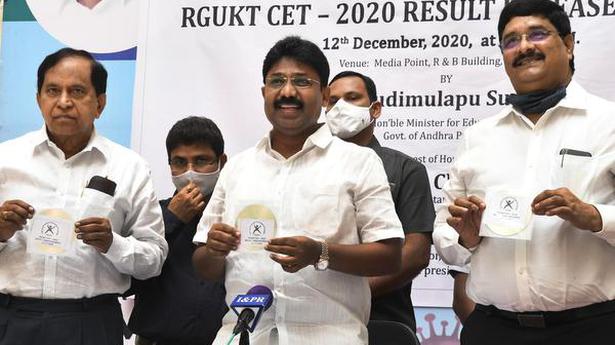 
Gurram Vamsi Krishna, a student of the AP Model School at Dachepalli in Guntur district, came first in the Rajiv Gandhi University of Knowledge Technologies (RGUKT) Common Entrance Test – 2020 by securing 99 out of 100 marks.

The Minister said the RGUKT had to deviate from its regular practice of admitting students based on their 10th class marks this year due to the COVID-19 pandemic that necessitated cancellation of the 10th class exams and conduct of CET to identify merit students.

The students who qualified in this exam would get admission in six-year integrated B.Tech programme and a few diploma programmes offered by Acharya N.G. Ranga University, Guntur, Sri Venkateswara Veterinary University, Tirupati and Dr. YSR Horticulture University, for the academic year 2020-21.

The counselling would start on January 4 and classes would tentatively begin in the second week of January, he said.

The exam notification was released on October 23. A total of 88,974 applications were received and 85,755 candidates appeared for the exam on December 5 at 630 exam centres in Andhra Pradesh and eight centres in Telangana.

The Minister said private educational institutions must carry out admission process through online mode in strict adherence to the norms stipulated by the government and any deviations would result in the institutions losing their recognition. The government had given permission for establishment of 300 new colleges from this academic year, he added.

We do not have any secret agenda like TDP: Sajjala

Educational institutions in Andhra Pradesh to reopen on November 2