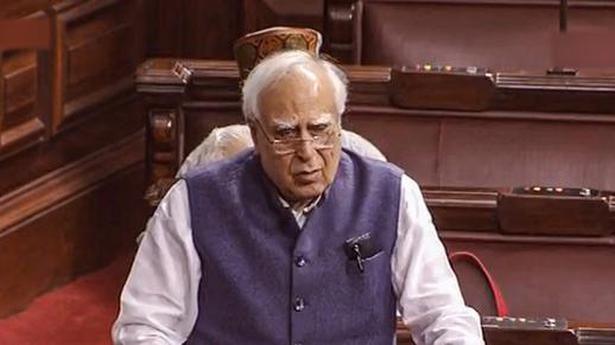 Reforms it has brought in will result in corporatisation of farming, he says.

The Rajya Sabha on Wednesday took up the discussion on the Budget with Congress leader Kapil Sibal leading the attack from the Opposition. He hit out at the government saying they want to speak only their “Mann ki Baat” and not listen to “Kisan ki Baat”.

Referring to Prime Minister Narendra Modi’s claim in the House on Monday that the MSP will remain untouched, Mr. Sibal asked, “You claim that the new laws will ensure that the farmers will get more than the MSP. Then what is the problem, why don’t you put this in the law?”

The agricultural reforms that the Modi government has brought in have already been tested in America and Europe, which resulted into corporatisation of farming killing the small farmers, he said.

“In 2020, American farmers were saddled with bankruptcy of more than ₹425 billion. This is corporatisation of farming and the result of corporatisation. In fact, the rate of suicide in rural America is about 45% higher than that in urban America. Small farm lands have disappeared,” he said.

And unlike the U.S., in India 40-60% are involved in agriculture and therefore the government should have had consultations before bringing in the laws. “The problem is you are not listening to “Mann ki Baat” of farmers. You always talk about your “Mann ki Baat”. What are farmers asking? Farmers are asking for MSP law…,” Mr. Sibal said.

When corporations ask for tax relief and exemptions, the government gives them. “But when farmers ask for MSP, you are not ready to give. Poor farmers are asking minimum, you give maximum to corporates…,” he said. India pays $11 billion subsidy to farmers, while it’s $185.9 billion in China, €101.2 billion in Europe and $48.9 billion in the U.S., he said.

He also slammed the government for what it called “perpetuating a rigged economic system” and data jugglery. He said the Budget was bereft of any thought for the poor and the unemployed who have been further pushed to the brink because of the pandemic. He said the economy was in the doldrums long before the pandemic hit and all the schemes of the government are aimed at helping a select few.

“There are four-five big boys who own almost all assets in this country, and one very big boy is everywhere. No; I will not name anybody. He is everywhere — ports, airports, city gas distribution centres, railways; everywhere. I mean, I see his footprint everywhere.”

Making a snide remark at the BJP he said, “After all you have to give airports to the person in whose airplanes you flew. This despite the reservations of the NITI Aayog.”

The Budget he said was aimed at vote-bank politics giving infrastructure projects to election-bound States. This too, he said, is a method to fool the voters, since all of them have long gestation periods. Nellore records more than 1,000 cases for third day in a row