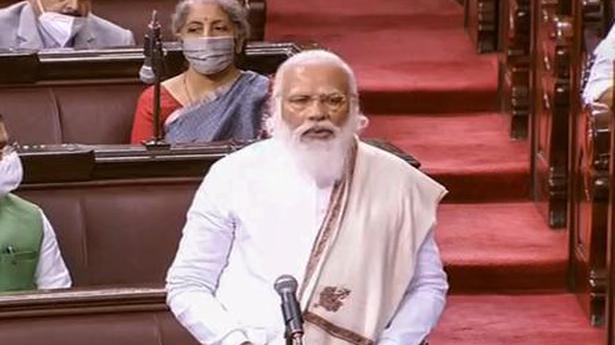 
Prime Minister Narendra Modi said on Monday that his government was still open to talk to farmers demanding a repeal of the farm laws passed last September, and said a minimum support price for crops was, is and would remain in force.

Mr Modi added that calling the Sikh community names was not doing any good to the country.

Replying to the debate on the motion of thanks to the President’s address in Rajya Sabha, the Prime Minister claimed that a proper response had been given by India to the situation along the Line of Actual Control (LAC).

Mr Modi said the nation was proud of every Sikh.

“Some people are feeding wrong things in minds of the Sikh people. This country is proud of the Sikhs. What have they not done for this country? The words and blessings of the Guru Sahibs are precious. Language used by some for the Sikhs is an attempt to mislead them is not going to benefit anyone,” he said.

Farmers from many States, including Punjab, have been camping at the three Delhi borders for the past two months in protest against the three farm laws.

Comparing the new farm laws with the Green Revolution, he said there was huge cry in the country then. “No one was ready to become Agriculture Minister in (former Prime Minister Lal Bahadur Shastri) Shastriji’s time. Planning Commission also opposed the agriculture reforms then. But Shastri ji moved forward. Left (parties) said the same thing then that it is being done on the instructions from America. Congress leaders were called “American agents”. Thousand protests were organised but Lal Bahadur Shastri moved forward and today we have surplus production,” the Prime Minister said.

Stating that the government wanted to accept good suggestions, Mr Modi urged Opposition members to take the country forward by explaining the good features of the laws to the farmers who are agitating.

“Agriculture Minister is talking to farmers. There are no tension yet. Protest is your right but I want to request that you should ask the old farmers who are sitting there to go home. I want to extend the invitation through this house. We should not lose this time, should progress, do not take the country backwards. We should give these reforms an opportunity and see if this benefits you. If there is a lacuna, we will fix it,” he said.

Quoting former Prime Minister Manmohan Singh, who was present in the House, Mr Modi told the Congress party that they should be proud that “Modi is implementing what Manmohan Singh said.”

Every party had promised farm reforms at some point of time, he says and lauded Jyotiraditya Scindia’s speech.

“The fun part is people who do politics, they have also implemented the laws in some form or the other. They have not questioned the spirit of law. Look at milk production, either private or cooperatives, a strong supply chain has emerged. This was not done only during my government,” he said.

“We also face challenges. We have to decide if we want to be a part of solution or part of the problem… A major part of the discussion was about the farmers’ agitation but not on the features of the law,” Mr Modi said lauding the speeches of Agriculture Minister Narendra Singh Tomar and former Prime Minister H.D. Deve Gowda.

“Today, 68% of farmers are small and marginal farmers. Over 12 crore farmers have less than two hectares of land. Don’t we have a responsibility towards the 12 crore farmers? This question raised by Charan Singh still exists; shouldn’t we find a solution? Loan waivers don’t benefit small farmers as they don’t approach banks for loans, he says. Such farmers don’t even have a bank account,” he said.

Mr Modi said that after 2014, government had transformed the crop insurance scheme to make it inclusive to small farmers, adding that ₹90,000 crore had been disbursed through crop insurance and that fisherfolk had also been included also in the scheme now.

Mr. Modi spoke about PM-KISAN scheme and said it benefited 10 crore farmers. The numbers would have been higher had Bengal government not blocked it, he said.

“Sermons were given regarding democracy here. Some objectionable remarks were used. India’s democracy should not be skinned this way. When I was listening to the members, I told myself are they talking about Bengal or the entire country? Our democracy is a human institution. India’s nationalism is based on Satyam, Sivam, Sundaram,”Mr Modi said quoting Netaji Subhash Chandra Bose. “We have lost Netaji’s vision over the years, and today we are searching ourselves. We have failed to tell our younger generations that India is the mother of democracy,” he added.

“Polio was once a deadly disease. Today, we have eliminated polio. Today, India has come up with more than one vaccine within a year (for COVID-19),” he said, adding that the world’s biggest vaccination drive is underway in India.

Obliquely touching on the ongoing Indo-China standoff, Mr. Modi said, “My government’s stand on the situation at LAC is very clear. The entire country can see this and is very proud of us. There can be no doubt about our commitment towards building border infrastructure and border security,” he said.

In the conclusion he said, that the policies his government is making, is not for temporary loss or profit. “We are laying the foundation of the dreams to take the nation to new heights by 2047 when the country will celebrate 100-years of Independence,” he said.