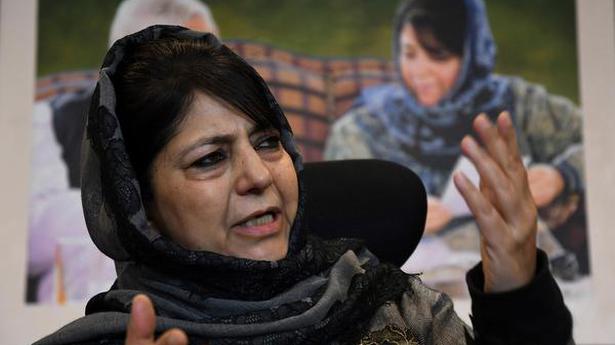 Peoples Democratic Party (PDP) president Mehbooba Mufti visited the nomads of south Kashmir, whose hutments were demolished by the authorities recently, and accused the Centre of pushing the Gujjars and Bakarwals to the wall.

“A sinister agenda is pursued against the peace-loving communities of Gujjars and Bakarwals in Kashmir and Jammu under the garb of new land laws. These people who have been protecting forests for many centuries are being evicted illegally”, she said after meeting the nomadic community in south Kashmir’s Lidroo village.

The Centre was trying to impose violence on these communities, “who have been traditionally peaceful by nature”, she alleged.

“The Gujjars have been using log and mud sheds in pasture lands since times immemorial during the grazing season. They are part of the forest and our environment. Sadly, a drive has been launched to demolish these structures and the families have been harassed. Is this a part of this displacement scheme? Who do they intend to sell the forest land to?” she stated.

On the reports of 24,000 kanals of forest land being transferred to industries, Ms. Mufti said, “It will be a disaster not only for the forests and environment but also to the Gujjar community, who will be rendered homeless”.

The Forest Act of 2006, which could provide a legal framework for Gujjar and Bakarwal rights on forest land, was yet to be implemented here when other laws were selectively applied here. The Centre should “immediately stop this illegal encroachment and harassment of a marginalized and most vulnerable community”, she noted.

‘Every aspect of life threatened’

“August 5, 2019 was not an event and the process of complete disempowerment and displacement of the people of J&K is unfolding with most of the new laws targeting land, resources and population of J&K and Ladakh. Every aspect of our life is threatened”, the former Chief Minister observed.

Ms. Mufti expressed apprehensions that the influx in the coming years would change the complexion of Jammu, Ladakh, Pir Panjal, Chenab beyond recognition. “The scenic beauty of J&K is a vital input into its economy, which with new influx will be a sure casualty and with the plans of opening industries on a large scale, Kashmir could look no different from Gorakhpur”, she added.

Ms. Mufti’s tour of south Kashmir comes just days after the Pahalgam Development Authority and the Wildlife Department instructed demolition of “illegal huts, dokas and fencing on the land”. Over 110 kannals of land was retrieved from the nomadic community.