The Greater Visakhapatnam Municipal Corporation (GVMC) is leading in the Citizen Feedback category for the ongoing Swachh Survekshan Survey-2021.

The civic body has topped in the category by a huge margin, overtaking Indore by collecting the most feedback in the 10 lakh-above population category, as on January 5.

According to GVMC officials, as of January 5, 6.30 p.m., 15,427 people had given their feedback for Visakhapatnam city, while Indore stood in second place with 4,378 people giving feedback, followed by South Delhi with 4,337. Among the 1-10 lakh population category, Kurnool and Tirupati too are leading with 8,135 and 3,659 people giving feedback respectively.

GVMC’s Chief Medical and Officer for Health K.S.L.G. Sastry said that on January 1, the feedback was low, but since January 2, the city has been receiving good feedback.

“With the help of ward secretaries and volunteers, we have been conducting awareness on Citizen Feedback. Every morning, the GVMC is taking up programmes in wards over the ongoing survey,” said Mr. Sastry.

Citizen Feedback will be held from January 1 to March 31. It constitutes 1,800 marks out of the total 6,000-mark in the survey. Citizens will be asked a couple of questions including cleanliness in community, commercial places and toilets. The feedback also questions how well the citizen is aware of the ongoing survey and previous survey. Apart from the number of people giving feedback, the category also includes the number of active users of the Swachhata app.

GVMC has not lived up to expectations in the Citizen Feedback category in the previous survey, when it stood 9th in the country. The civic body aims to improve its performance in Citizen Feedback as well as active users in Swachhata app this year.

The final ratings will be updated until the final day. Teams from the Centre are likely to visit the city in March or even before. GVMC to grow Miyawaki forests at 25 places in city 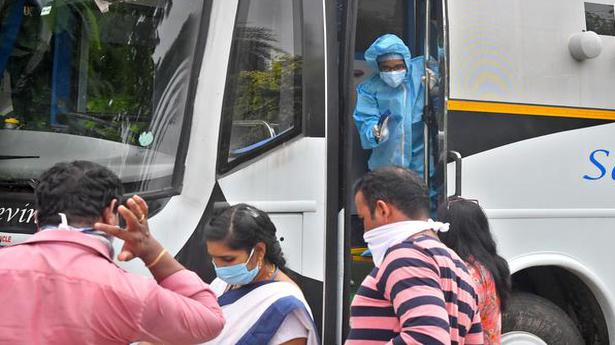 East Godavari Collector D. Muralidhar Reddy on Saturday said that nearly 34,000 frontline staff, including doctors, were being administered the