Meeting soon to consider demand, says Minister after handing over cows to 86 beneficiaries

Cooperation Minister S.T. Somashekhar has said that soon a meeting will be held in connection with the demand for a district cooperative bank and a district milk union for Haveri.

He was addressing a gathering after symbolically handing over cows to 86 beneficiaries of dairy farming scheme implemented under the sustainable farming programme at Haunsbhavi in Haveri district on Monday.

Mr. Somashekhar said that at present the Karnataka Central Cooperative Bank covered three districts of Dharwad, Haveri and Gadag and a meeting regarding creating a district cooperative bank will be held in consultation with Ministers and MLAs of the three districts, including the Home Minister.

He said that creating district milk unions will help in further increase in milk production and soon a meeting will be held in this regard also. The Minister said that following the village stay programme of the Agriculture Minister, several new issues have come to light and these will be incorporated while making the Budget.

“On these lines, our government has chalked out a programme to solve people’s problems. Under the programme, the Deputy Commissioners are being asked to conduct village stays. In the coming days, the Revenue Minister will be staying in villages in a bid to address citizens grievances,” he said.

Earlier, the Minister, along with Mr. Patil, inaugurated the new helipad at Basarihalli in Hirekerur taluk of Haveri district. Both the Ministers arrived in a helicopter at the village and inaugurated the helipad by cutting the ribbon. The helipad has been constructed at a total cost of ₹38.10 lakh. 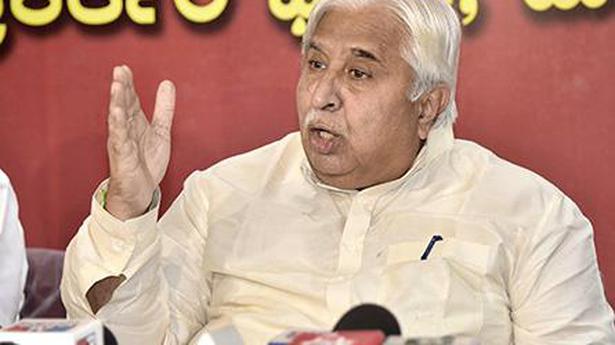 Webinar on UPSC training on Tuesday