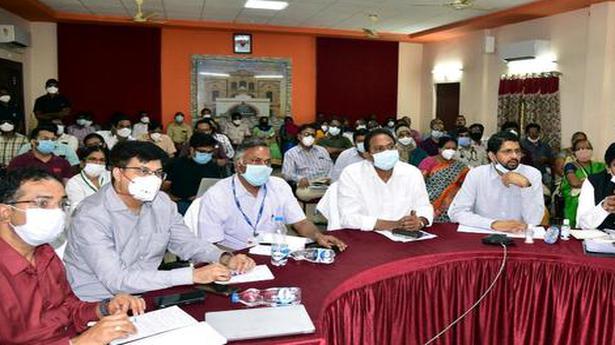 
Doctors and officials of various government departments, who have been investigating the reasons behind the mystery disease since its outbreak one week ago in Eluru in West Godavari district, are still chasing all kinds of leads.

As part of their efforts to unravel the causes behind the neurotoxicity symptoms with which people are being admitted to hospitals, expert teams camping in Eluru have sent food, water and milk samples to different laboratories.

The expert teams comprise, among others, representatives of the All India Institute of Medical Sciences (AIIMS), New Delhi and Mangalagiri, National Institute of Nutrition (NIN), Hyderabad, Indian Institute of Chemical Technology (IICT), and National Centre for Disease Control (NCDC).

It is said that it may take a few more days before the lab reports are out, which probably will throw light on the exact cause of the illness.

The water samples being collected on a daily basis in Eluru and tested at different labs showed that it was safe for consumption.

“Presence of herbicides (a chemical used to destroy weed and unwanted plants) has been found in the studies taken up by the NIN. The samples relating to vegetables, fish, meat, rice and soil are under analysis and their results are awaited,” Joint Collector Himanshu Shukla said.

Earlier in the day, during a video-conference with Chief Minister Y.S. Jagan Mohan Reddy, scientists of the State and Central institutions said that a detailed study was under way to find out if there were any toxic chemicals or organophosphates in the blood samples of the patients.

Deputy Chief Minister and Minister for Health Alla Kali Krishna Srinivas, who called on the patients in the Eluru Government General Hospital (GGH), explained the treatment being extended to the patients.

Health and Family Welfare Commissioner K. Bhaskar and Collector Revu Mutyala Raju detailed the precautionary measures being taken to check the spread of the disease.

“Samples of chicken, fish, shrimp and mutton, and other food samples are being tested,” the Commissioner said.

The Joint Collector put the total number cases since the outbreak of the disease on December 5 at 616. Of them, 576 were discharged. About 33 cases have been referred to the GGH in Vijayawada and Guntur, Mr. Shukla said.

“We are expecting the lab reports by December 15 or 16. The number of patients being admitted with symptoms of epilepsy and convulsions has come down,” said District Coordinator of Hospital Services A.V.R. Mohan. One thought on “Health experts chasing all kinds of leads”