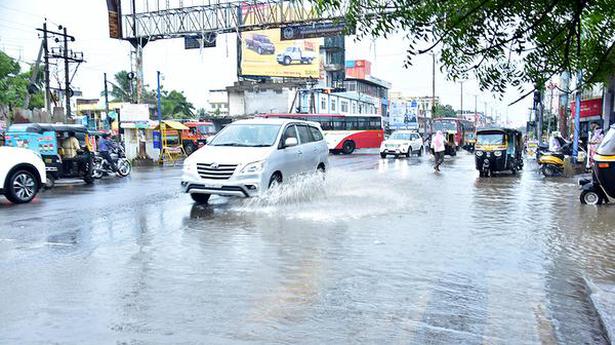 
Heavy rain that lashed parts of Kalyana Karnataka region on Saturday night and Sunday morning has caused loss of lives and damaged standing crops apart from throwing life out of gear.

As per information available, Vishwanath (14) and Purnachandra Jayi (15) were washed away in an overflowing stream near Shahabad on Sunday when they attempted to cross it. Hearing the tragedy, the villagers rushed to the spot and retrieved the bodies. A case was registered at Shahabad Police Station.

Due to heavy rain that lashed the region on Saturday, rivers, their tributaries, streams and rivulets are in spate in Kalaburagi district. Low-lying areas in Kalaburagi city were flooded for hours.

According to India Meteorological Department, rainfall recorded till 8.30 a.m. on Sunday in the district was 20.4 mm against a normal rainfall of 4 mm. Among taluks, Aland recorded the highest rainfall with 32 mm followed by Chincholli with 28 mm, Chittapur 24 mm and Jewargi with 14 mm.

Among towns, Khajuri in Aland taluk recorded the highest rainfall of 36 mm.

Venkanagouda Saligoudar (40) of Konnur village slipped into the Malaprabha as he was trying to cross it. Tahsildar Suhas Ingale said that a search is on for the body. Water gushed into houses in Hungund town in Bagalkot district. Residents of Hoogar Layout, Omshanti Nagar, Babu Jagajivanram Nagar, Ambedkar Nagar and some houses behind the bus stand had to flush out water from their houses. The underpass at the Amaravati Circle was submerged after heavy rain, cutting off connection between Gattiganur, Binjawadagi and surrounding villages with Amaravati.

Water entered the Hanuman temple in Tulasigeri village near Bagalkot and some devotees set up pumpsets to flush out water. The tank at Kelavadi was nearly full and farmers are worried that it would overflow and enter their fields. Crops were damaged in some villages in Bagalkot and Hungund taluks, officers said.

Vidyagama to be re-launched on January 1