Downpour lashed the twin cities and surrounding villages from Friday night and continued on Saturday morning too resulting in flash floods in a few streams and inundation of low-lying areas like Haveripet in Dharwad.

The Dharwad-Saundatti road was waterlogged for few hours in Dharwad.

Following the downpour, power supply was disrupted in several localities in Dharwad city on Friday night and it was restored only on Saturday evening.

According to an initial estimation, standing crops in 8,000 hectares of farmlands in Dharwad taluk alone have been damaged.

Officials of the Agriculture Department said that following a spate in Tuppari Halla, standing crops of soya, cotton and maize had been damaged in fields along the stream.

Rains have caused damages to onion and chilli crops too.

The bridge on the Dharwad-Saundatti Road near Harobelavadi has been submerged once again severing the road connectivity.

Huli Keri in Alnavar taluk, where maximum rains were witnessed, is almost full to the brim. Further rains may cause the tank to breach, sources said.

There have been reports of inundation of a few small bridges in Gadag district, which also witnessed downpour from Friday night.

Interspersed with small pauses, rainfall lashed the city on Friday night continued on Saturday disrupting the normal life in most parts in Kalaburagi district.

The downpour started as a light drizzle on Friday evening, the rains picked pace in the night and intensified to continue on Saturday too.

Most roads of the city were hit by the showers leaving most of the areas and road corridors inundated with water affecting the movement of traffic. The rainwater entered few houses and gushed into cellars of commercial complexes.

According to the India Metrological Department, the rainfall recorded till Saturday 8.30 am in Kalaburagi district stood at 58 mm rainfall against the normal rainfall of 6 mm.

Life was completely disrupted as people in low-lying residential layouts were seen busy removing rain and drain water from their houses.

Standing crops, such as green chilli, cotton, paddy and red gram, on nearly 1,000 acres were destroyed.

Between 50 and 75 pump-sets that were set up to to irrigate land from the Krishna and the Bhima were also washed away.

A motorcyclist who was crossing the bridge near Yelheri fell into the water and was rescued.

(With inputs from Kalaburagi and Yadgir) 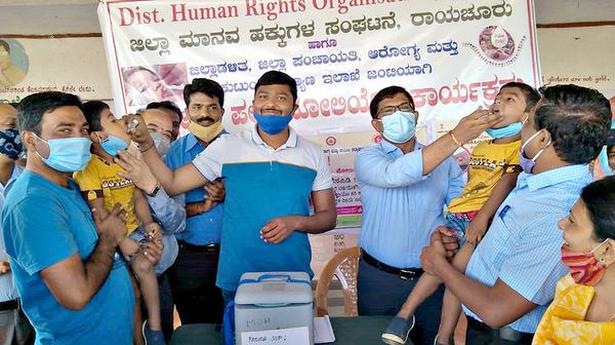 Five-day science fair to be held at Dharwad