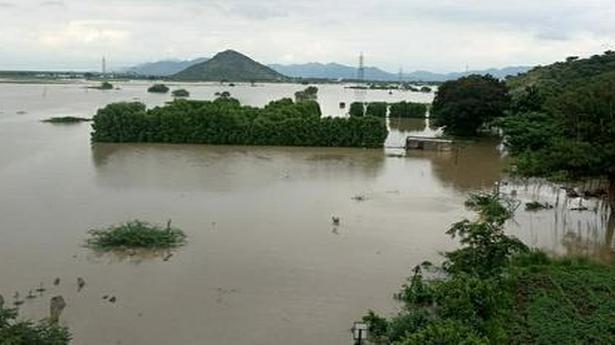 
Krishna river once again is in spate since Tuesday night bringing in woes of flooding to thousands of families residing in the low-lying areas downstream of Prakasam Barrage in the district.

The Barrage recoreded the season’s highest inflow and outflow of 7.71 lakh cusecs as of 7 p.m. on Wednesday.

During the current season, since September 15, the first flood warning was issued six times and a second warning was issued twice. Less than 20 days ago, the barrage saw an inflow of over 7 lakh, throwing life out of gear in all the low-lying areas in the district.

District Collector A.Md. Imtiaz said that paddy crops in at least 12,466 hectares and horticulture crops in over 1,400 hectares were damaged due to the flood. He said 18 houses were completely damaged and 53 were partially damaged in the district.