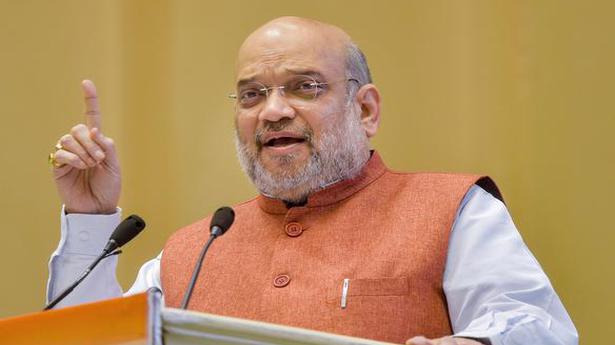 Time has come for youth to opt for their local languages and shun any feeling of self-doubt and inferiority, he says

Union Home Minister Amit Shah on Tuesday said there was no conflict between Hindi and other Indian languages and that it could progress only through the approach of complementary coexistence.

Language was an essential part of Prime Minister Narendra Modi’s vision of self-reliance. The objective of “Aatm-Nirbharta (self-reliance)” could be achieved in real sense only if the country was also independent in terms of relying on its own languages, he said.

Speaking at the Hindi Diwas Samaroh, Mr. Shah said Hindi was a friend to all the other Indian languages and they complemented each other.

“When we adopted the Constitution, we also accepted the decision on September 14, 1949, to have Hindi as the country’s official language and Devanagari as the script. The decision was taken following an extensive debate, at the core of which was the basic understanding that there was no competition between the Indian languages,” he said, adding that all the languages strengthened one another. Likewise, all the regional languages were also adopted.

Mr. Shah said since 2014, there had been a qualitative change and the number of MPs expressing themselves in their own languages had also gone up considerably.

Mr. Shah said the new education policy stressed on the use of regional and official languages, particularly the mother tongue for imparting education till 5th standard.

The same principle was being promoted for higher education. When it came to technical education, 14 colleges in eight States were to start their courses in five languages: Hindi, Tamil, Telugu, Bengali and Marathi.

A high-level committee had been formed for translating the course contents. E-study material was also being prepared in various languages.

Stating that it was the occasion to evaluate the steps being taken for the protection and promotion of the official and the regional languages, particularly in instilling a sense of pride in the new generation for their languages, the Union Home Minister said he was confident that Indian languages would always thrive.

He said the time had come for the youth to opt for their local languages and shun any feeling of self-doubt and inferiority, pointing out that the Prime Minister too addressed top international fora in Hindi, a trend that was started by former Prime Minister Atal Bihari Vajpayee. Parents should also interact with children in their own language as mother tongue would keep them connected to their roots, which was important for their overall progress.

Mr. Shah said foreign languages were not effective in properly acquainting the people to the country’s glorious past and culture. He advocated translation of the history books of various regions and States into Hindi for the benefit of all countrymen.

The Union Home Minister said Indian languages had played a vital role during the freedom struggle under the leadership of Mahatma Gandhi, who linked the official language to the idea of nationality. Top leaders like Pandit Nehru, Vallabhbhai Patel, Rajendra Prasad, K.M. Munshi and Vinoba Bhave also worked on strengthening Indian languages, he said.

Given robust system of reporting, missing out on COVID-19 deaths unlikely: Govt