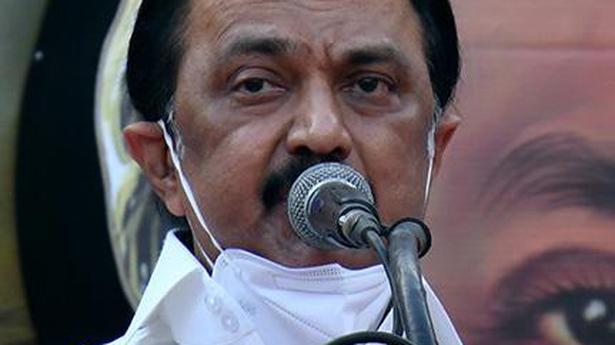 
DMK president M.K. Stalin has written to Chief Minister Edappadi K. Palaniswami, urging him to hold the Centre accountable for the non-payment of GST compensation to the States.

Mr. Stalin thanked the Chief Minister on behalf of the people of the State for declining to accept both borrowing options proposed by the Union government at the GST Council meeting held on October 5. Appreciating the Chief Minister for upholding federalism, Mr. Stalin said the Centre had a moral and legal obligation to pay compensation to the States and its proposal that the States borrow to meet their revenue shortfall was a travesty of the rights of the States and justice.

“Further, the CAG report for the fiscal year 2018-19 shows the Union government had illegitimately transferred ₹47,272 crore from the GST compensation fund to the Consolidated Fund of India during 2017-18 and 2018-19. The possibility of such illegitimate transfers for the past fiscal year [2019-20] remains,” he said.

Mr. Stalin said that according to the CAG report, the Centre admitted to such wrongful actions and promised to correct them by depositing the money back into the GST compensation fund from the Consolidated Fund.

“In light of these facts, I urge you to ensure that the Union government will stick to its commitment to the CAG, reimburse this amount immediately and initiate compensation payments to the States from this deposit. The additional funds required to honour the Union’s Legal Obligations for the year can be borrowed from the market or the RBI and credited directly into the compensation fund, with the Union government serving as a guarantor for their repayment,” he said.

He also accused the Tamil Nadu government of betraying the people on the issue.