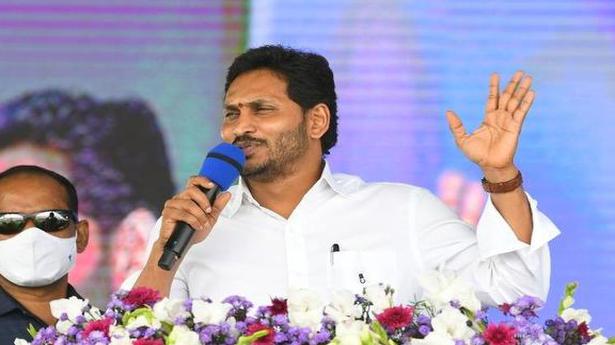 
The building of 30.75 lakh houses in the next three years will give a leg-up to the construction sector, besides improving the State’s economy, Chief Minister Y.S. Jagan Mohan Reddy has said.

Addressing a public meeting at Gunkalam village, about 8 km from here, on Wednesday, Mr. Jagan Mohan Reddy said everybody involved in the sector, be they construction workers, or electricians, or plumbers, would get hands full of work with the establishment of Jagananna Colonies across the State, wherein properties worth ₹25,000 crore were being created as part of the Navaratnalu schemes.

In the village, 12,301 house site pattas were distributed to the beneficiaries on the occasion. “In the next three years, the government plans to construct housing units on the sites and help the beneficiaries realise their dream home,” the Chief Minister said.

Accusing the TDP of trying to stall the distribution of house sites by obtaining stay orders from the courts, Mr. Jagan Mohan Reddy said, “We have planned to distribute house sites to nearly 54,000 beneficiaries in Amaravati. But the TDP has put a spoke in the government’s wheel and prevented it from implementing the scheme not only in Amaravati but also in Visakhapatnam, Kadapa, and East Godavari districts. As a result, nearly one lakh beneficiaries could not get the house sites.”

The Chief Minister further said that work on the construction of JNTU in Kurupam, Central Tribal University in Saluru mandal, and Government Medical College in Vizianagaram would begin in six months.

Minister for Municipal Administration Botcha Satyanarayana said the massive housing programme was becoming a reality because of the determination of the Chief Minister.

“A perfect gated community at Gunkalam will come up in a couple of years, thanks to the Chief Minister’s determination to ensure houses for the poor in the Vizianagaram Assembly constituency,” MLA K. Veerabhadra Swamy said.

Earlier, a few beneficiaries explained their ordeal in rented houses, and thanked the Chief Minister for kick-starting the housing programme to make their dream home a reality.

They said each beneficiary at Gunkalam would get property worth about ₹8 lakh.

No death reported in State in 24 hours